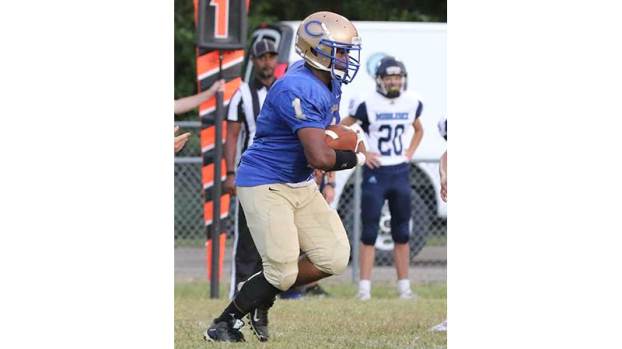 Cumberland County High School senior DaJuan Brown, pictured from a previous game, was one of the few bright spots for the Dukes on Friday night, returning from injury to lead the Dukes with 65 yards rushing. (Photo by Titus Mohler)

“We just turned the ball over way too many times,” Dukes Head Coach Howard Paras said. “It was unforced turnovers, guys just dropping the ball … fumbles. That killed us. We were moving the ball, and then we would fumble, and that was the story of the night.”

The Dukes committed a total of seven turnovers, four via fumbles and three via interceptions.

A major struggle for Cumberland (0-6) this season has been putting points on the scoreboard. It has scored only 12 points in six games. Paras, who serves as the Dukes’ offensive coordinator, cited youth at all of the skill positions as being a key factor.

“We’ve got a lot of 10th-graders starting, so I think a lot of our guys are a year away from really being where they need to be at the varsity level,” he said.

One area that the coach indicated was not an issue for Cumberland is up front on the line.

Paras and his staff have been exploring options at the quarterback position.

“We’re working in a few different guys, so we’re still trying to find the answer there,” he said.

The Dukes had been waiting to get a few players back from injury, and one of those returners Friday was senior DaJuan Brown, who led Cumberland with 65 yards rushing.

A standout on defense included sophomore Kyler Gilliam, who recorded three tackles and one interception, which he returned 28 yards.

“He’s been pretty consistent for us, especially on the defensive side of the ball,” Paras said. “He’s a sophomore as well, so our guys are young.”

Sophomore Nasir McDonald recovered a fumble and returned it 29 yards, and junior Vince Harris Jr. had four tackles and a sack.

The Lady Falcons have started a turnaround