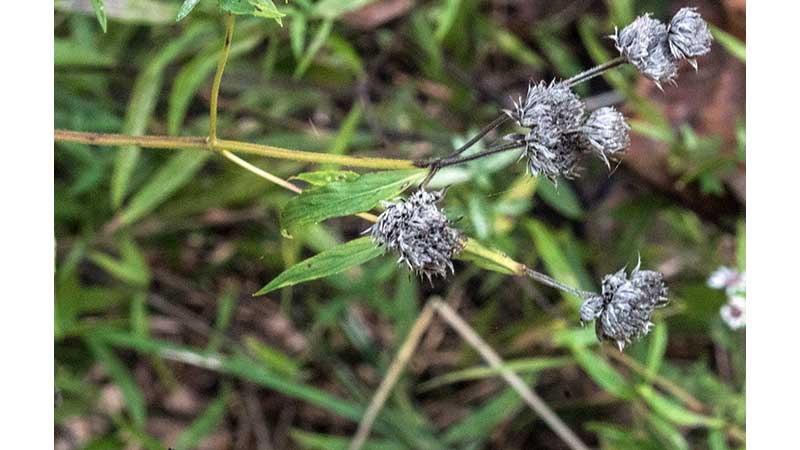 At the end of a long, hot summer, Torrey’s mountain mint isn’t very attractive, but it will be late next June.

It’s been so hot and dry that I decided Oct. 4 would be my last major hike before the skunk cabbages emerge in late December. I knew that I’d found two plants that were probably county records and that specimens needed to be collected and locations noted, so…my hiking partner, the one who’s forgotten more about plants than I ever knew, the one who’s a co-author of the Flora, agreed to meet me for a very task-oriented expedition.

Things didn’t get off to a great start. We spent an hour walking back and forth in a meadow looking for a striped gentian (Gentiana villosa) that had been there two days earlier and that was a county record. We couldn’t find it. Nothing. Fortunately, we did find some dog-fennel (Eupatorium capillifolium), a tall, weedy plant that was a county record, but that didn’t leave either of us satisfied about the morning.

We started walking down a power line right of way, an area that we had explored earlier this year, and that would eventually lead us to a shortcut down to our favorite swamp. The right of way was rough walking, and most of the plants looked crispy. We weren’t really expecting to find anything interesting, but … suddenly my hiking partner stopped, dropped his backpack, and announced that the half dead plants beside the right of way were quite possibly the most exciting plants he had seen all year. We had stumbled upon Torrey’s mountain mint (Pycnanthemum torreyi), which has a global rank of G2, meaning that it’s imperiled and at high risk of extinction because of its very restricted range, and which has a Virginia state rank of S2, meaning it’s imperiled and at high risk of extirpation from the state.

Torrey’s mountain mint was first named by the British botanist G. Bentham in honor of John Torrey, the New York botanist who wrote the first Flora of New York in 1834. It’s never been a common or widespread plant. It’s rare everywhere it’s found, but was probably once most common in Virginia, Pennsylvania, New York and New Jersey.

When Torrey’s mountain mint isn’t crunchy from high temperatures and drought, it is an erect perennial that grows 1 to 3 feet tall and is loosely branched with square stems. The leaves are usually pubescent with 4 to 5 pairs of lateral veins. Torrey’s mountain mint has fragrant whitish to pinkish purple flowers with dotted lips. The flowers are arranged in dense heads with bracts that are longer than the flowerheads. This mountain mint looks similar to P. verticillatum and has been known to hybridize with it.

Torrey’s mountain mint grows in dry, rocky, or sandy woodlands and clearings, and sometimes in calcareous fens and seepages. It grows in both extremely acidic and basic substrates. Where we found our plants was definitely dry and rocky.

After collecting a specimen, noting the location and practically dancing around the site, we went on to our favorite swamp where we found the turtleheads (Chelone glabra) and soapwort gentian (Gentiana saponaria) that were on our agenda for the day. The turtleheads were another much-needed county record, but our minds were still on the Torrey’s mountain mint. My friend was on the phone to Richmond as soon as we left the swamp and had a cellphone signal. Finding this plant is a big deal and now plans will have to be made to protect it from the mowing operations and herbicide sprays that are periodically carried out along the power line. Are hikers likely to find it and be a problem? Not really. The area is too rough for most recreational hikers, and the plants are well camouflaged.

You never, ever know what you might find when you go hiking, even in an area that you’ve explored many times before. Just keep looking. Inspect every plant. You might get lucky and find something interesting.

CYNTHIA WOOD is a master gardener who writes two columns for The Herald. She can be reached at cynthia.crewe23930@gmail.com.

A tale of persistence and what grows in the…