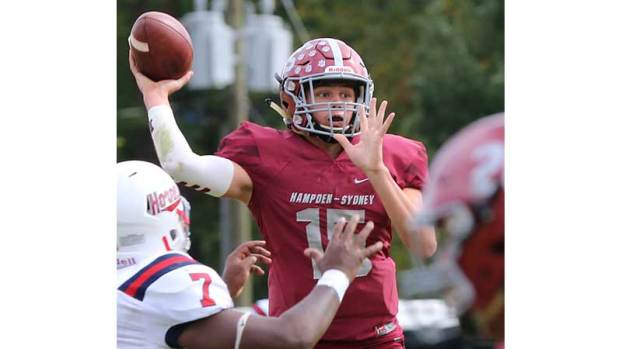 Hampden-Sydney College senior quarterback Austin Murphy came off the bench Saturday to throw for a career-high 212 yards and two touchdowns. The Tigers were highly competitive but ultimately fell 21-17, dropping to 1-6 on the year. (Photo by Titus Mohler / Herald)

Senior quarterback Austin Murphy came off the bench to pass for a career-high 212 yards and two touchdowns on 25-for-43 passing for the host Tigers (1-6, 0-5). He also threw two interceptions.

The release noted that Tigers junior wide receiver Dillon Costello had a career-high 12 receptions for 56 yards and a touchdown. Ben Agostino and Ben Rhodenizer each passed for a touchdown for the visiting Hornets (4-2, 3-2), including the game-winner from Rhodenizer to Casey Stewart for 10 yards and the go-ahead touchdown with nine minutes and eight seconds remaining in the game.

H-SC put the first points on the scoreboard with 8:02 left in the first quarter, getting a 20-yard field goal from junior kicker Rhett Andersen, the release noted. The Tigers had taken the opening possession of the game and drove 69 yards on 14 plays for the early 3-0 advantage. Senior captain and quarterback Clay Vick was 7-for-8 passing on the drive for 47 yards, including four passes to Morgan for 40 yards. Junior tight end Ed Newman, formerly of Fuqua School, had two carries for 20 yards on the drive, including a 16-yard run on an end-around play.

After exchanging possessions, the Hornets went 48 yards on seven plays capped by a 20-yard touchdown pass from Agostino to Stewart near the end of the first quarter, the release continued. The Tigers re-took the lead late in the second quarter at the 3:28 mark when Newman scored on a six-yard touchdown pass from Murphy, who had replaced an injured Vick at the start of the quarter.

Shenandoah regained the lead before halftime, though, 14-10.

Tigers senior captain and linebacker Griffin Davis and classmate and linebacker Tony Talbert — a pair of Monticello High School graduates — each had a game-high 12 tackles, also a career-high for Talbert, the release stated.

H-SC will play on the road at ODAC member Guilford College on Saturday afternoon, Oct. 26, at 1 p.m.