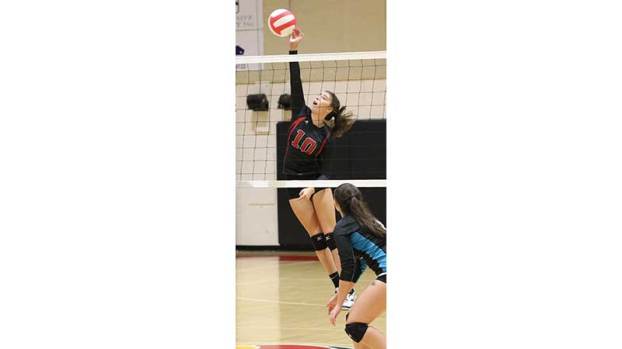 The Lady Falcons have started a turnaround

Fuqua School’s varsity girls volleyball team is experiencing the resurgence that Head Coach Jamey Morris was hoping for, recovering from a slow opening to the 2019 season.

The Lady Falcons began the season with a 3-6 run, including an 0-4 start in the Blue Ridge Conference, but they have now won three of their last four matches, improving to 6-7 overall and 2-4 in the conference.

Following that victory, Morris praised the strong, ace-laden serving of Lady Falcons eighth-grader Aubrie Jefferson and then highlighted other players as well.

“Carmen Reynolds and Lexy Tharpe both played really well with the defense, and then both my setters worked well — it was just a team effort,” he said. “Everybody just did their job, and that was a good thing. We haven’t been playing our roles, so to speak, and we really did it tonight, so it was a good all-around win.”

Morris is hoping his team has begun its turnaround, and he is expecting a strong second half to the season for Fuqua.

The 2019 Lady Falcons have a roster that features three seniors, four juniors, a sophomore, two freshmen and an eighth-grader.

As for leaders, Morris pointed to Reynolds and Schmidt, both seniors, and Tharpe, who is a junior.

“Those three, they’re my captains,” the coach said.

Reynolds is able to play all the way around the court; she shines as a hitter, defender and server.

“She’s just a well-rounded player, so she does a little bit of everything,” Morris said. “She’s quite an athlete.”

Tharpe has begun playing the role of libero for Fuqua.

“We just picked this role up two weeks ago when Sophie Watson came back, and it was weird not having a libero, and now we’ve worked it in, and we’re moving the train down the tracks, I guess,” Morris said. “We’ve turned it around, we’re using it, we’re seeing the benefit of it …”

The coach explained how having a libero changes the dynamic of the team.

“It keeps a primary defensive specialist in, so passing is the first thing you need to do in volleyball,” he said. “If you don’t pass, you don’t set and you don’t hit. So if you can get the balls up, defensively, and get them where we can make plays, then that’s what we need to do. And she has unlimited subs, so she can go in and out, and I have her going in and out for my middles, my taller girls, because she scoots around the floor.”

Watson’s return to the team has given it another strong setter and overall offensive player, the coach said.

“She’s left-handed, which helps me out on my right side, hitting,” he said. “That’s actually her power side, and everybody else, if you’re right-handed, that’s your weaker side.”

In terms of young up-and-comers on the varsity roster, Morris said, “I see a lot of potential in Aubrie Jefferson. … And she plays travel ball as well, and she’s one of my better players all the way around.”

After hosting North Cross School on Thursday, the Lady Falcons are set to host Timberlake Christian School on Monday at 5:30 p.m.