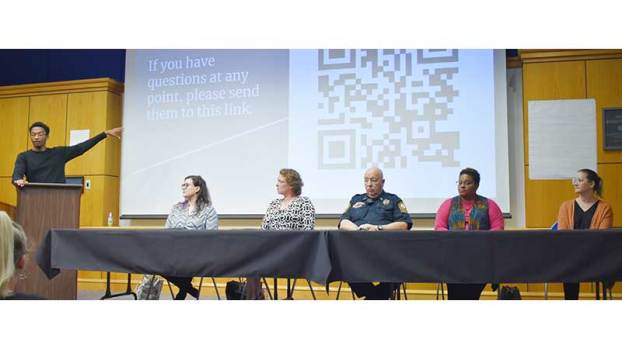 Representatives from Longwood and the Town of Farmville gathered Tuesday night, Oct. 22, to hold a Q&A panel for students with questions or concerns regarding Title IX issues and resources for sexual assault victims.

A question brought up during the town hall included how Longwood officials deal with issues of Title IX misconduct with Hampden-Sydney College students.

“So, it gets a little bit challenging when we’re dealing with two jurisdictions,” Moran stated. “Title IX provides resources for individuals that we have jurisdiction over, so people that are affiliated with Longwood. If we have a report where there is a respondent who goes to a different college or is not necessarily affiliated with Longwood, our response is limited to providing support and resources to students on our campus and then reaching out if the complainant is interested to Hampden-Sydney and working with Hampden-Sydney to have their Title IX office do an investigation based on their campus and how they proceed.”

Beach explained that once a circumstance comes to the attention of the Longwood Police, they immediately open a case and start a process to determine where the assault occurred. “In the criminal justice side, that’s a big deal, determining jurisdiction as to where it happened,” Beach stated.

Beach said that if the Longwood Police determined an offense had taken place on Longwood property, the department would gather up all evidence and information and hand it over to the commonwealth’s attorney. He explained that if the offense was determined to have happened at Hampden-Sydney, Longwood police would then turn over evidence to officials from that jurisdiction, where it would become their responsibility.

Moran clarified to the audience that her administrative processes are different than the criminal processes undertaken by police and that a lower burden of proof is required for action in the Title IX Office.

“And that I think — and I’ll let the commonwealth attorney speak to this, because I know this is a big concern for all of us, really — that is sometimes the confusion in this whole process,” said Beach. “On my side and the commonwealth attorney’s side, we are operating under the laws of the Commonwealth of Virginia, which requires that for us to prosecute that case; we have to come to a conviction and that case has to come to beyond a reasonable doubt.”

Clark added that victims, if they choose, are allowed to report an incident to their Title IX coordinator without a criminal prosecution taking place. She advised that even if a victim does not wish for a criminal prosecution to take place, it is still important for investigators to obtain evidence like bedding in the event that a victim decides several years later that they would like to seek justice in the form of prosecution, stating that future cases are in jeopardy of weakening if evidence is not initially gathered.

“What are the best ways for friends, family and faculty to support survivors of sexual assault?” Jackson asked.

Chassey responded, “I feel that the best way to support a loved one who has experienced sexual violence is to just start believing them. Listen to them, just take it all in. Don’t try to insert any advice or any opinions. Just listen to them. Tell them that you’re there for them, and support them through the process.”

Jackson presented the panel with the question, “What is a PERK exam?”

“PERK stands for physical evidence recovery kit,” answered Chassey. “It’s when you have evidence collected from your body that can be used in the case.”

“And correct me if I’m wrong, Liz,” said Clark. “But, individuals going through PERKs have the right to have an advocate present?”

Clark and Chassey reiterated that victims have the right to have an advocate with them while undergoing a PERK exam. Individuals can choose to have an exam done even if they don’t choose to report their assault. Advocates can be present with victims as a form of emotional support during the exam.

Beach added that Southside Hospital does not currently perform PERK exams and that individuals that request a PERK exam often must go to Lynchburg in order to have the test done. “Our policy is, depending on the medical conditions … We will take them, be with them, carry them to Lynchburg, get that process underway,” he explained.

Beach highlighted that legislators are attempting to work with hospitals like Southside to establish a forensic nursing program so as to prevent victims of sexual assault from having to travel hours away to get an exam done.

“We will always advocate and work through with the survivor to make sure that if they want that PERK test done, we’ll get it done,” added Beach.

Jackson asked the panel what resources were on campus for victims of sexual assault.

“For our Title IX process, the administrative process, we have a variety of resources on campus,” said Moran. “We obviously rely on SaVE (sexual violence elminination act) as well as CAPS, but there are resources available that you might not necessarily see in a handbook somewhere. The good thing about the Title IX Office is that I have a lot of leeway in terms of what we can do to help remedy the situation and continue your academic success here at Longwood.”

Chassey added that she is present on campus two days a week to provide counseling for sexual assault survivors.

Jackson asked the panel what students should do if they feel that they are about to be sexually assaulted.

“Sometimes I see young people walking by themselves, and it scares me, especially at night,” added Clark. “But I would say, take a self-defense class. Something as simple as your keys, if you put a key between your fingers, that’s a weapon for you.”

Beach brought up the fact that Longwood police try to offer all-female RAD (rape aggression defense) classes at least once a semester. Clark added that the Farmville YMCA offers classes for both men and women as well.

During the end of the town hall, Wilkins established herself as a person that students can come forward to for confidential reporting. “So, at CAPS we all are mandated reporters. …What you say in the room stays in the room; that’s confidentiality. We only inform outside members, which are often law enforcement, in case of child abuse or neglect.”

“If someone’s an imminent harm to themselves or others, or if you report that someone else is an imminent harm to themselves or others, we’re talking about suicidal ideation, homicide or if it’s dependent/adult/elder abuse or we get a subpoena, those are the areas in which we would break confidentiality,” added Wilkins. “In the case of Title IX or sexual assault, as an adult you have a right to confidentiality and to have a safe space to discuss what’s going on.”

Wilkins also explained that as a campus advocate, she has the power to send a “limited report” to the Title IX Office with limited information inside as another option for victims.

Panel members discussed more topics and answered additional questions before the event ended. As the town hall came to a close, students were advised to not hesitate in contacting any of the panel members if they were in need of help or had more questions involving Title IX, sexual misconduct, or their own personal safety on campus.

Thousands of books being distributed and thousands of happy children were the focuses of the sixth annual Virginia Children’s Book... read more