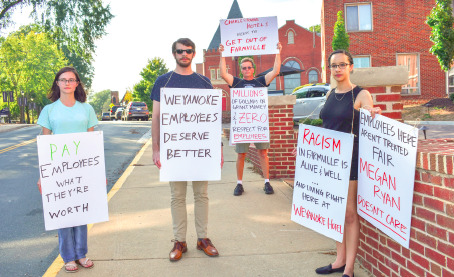 The protesters identified themselves as previous hotel employees Sean Adkins, Casey Early and Elaina Hill. The group stated that they were protesting the treatment of hotel employees since Hotel Weyanoke’s opening in May 2018.

Adkins, who was wearing a sign that read, “WEYANOKE EMPLOYEES DESERVE BETTER,” stated, “So, basically, I was actually terminated without any warning, no write-ups. There was no written policy for what I got terminated for. Overall, we’re out here to just kind of show them that you can’t push employees around, especially since we’ve been here since the place opened about a year ago.”

“I mean, Sean, he’s being very humble about the whole thing,” added Hill. “Sean and I both, we were fired with no warning whatsoever for basically nothing.”

Elaina’s father, Ken Hill, also participated in the protest to show support for his daughter and her previous co-workers.

Jennifer West, director of operations for Charlestowne Hotels, stated in an email Monday afternoon, “On behalf of Hotel Weyanoke, I can confirm that a guest service manager and chief engineer were let go on Sept. 19, for violations of employment policy. Every staff member is held to a standard code of conduct agreed upon when accepting employment. Violations of that policy result in termination, as is the case with any company’s employment agreement. We remain committed to providing a fair, diverse and benevolent work environment.”

Early added that the group of protesters were sent away by police after learning that a permit was required to protest at the location. She stated that the group plans to come back with a permit.