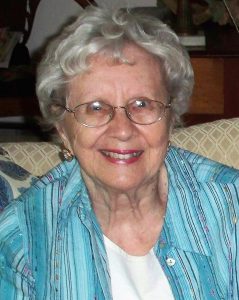 Nancye Bruce Noel, 96, passed away in Richmond, Virginia, on October 20, 2019. She was born near Rice, Virginia, on December 27, 1922, the daughter of the late William Basil Bruce and Annie Scott Gilliam Bruce and was preceded in death by her beloved husband of 60 years, Winston Owen Noel.

Longwood University), Nancye was a member of the choir performing Brahms’ Requiem at Radio City Mu- sic Hall for nationwide broadcast by NBC. In 1963 she earned a Master of Education degree from the same institution. She taught for 29 years, starting at Farm- ville High School and retiring from Longwood College in 1985. She was a member of Heritage Baptist Church and its choir; a charter member of the Nora Lancaster Garden Club; and a member and former Regent of the Judith Randolph-Longwood Chapter of the Daughters of the American Revolution. Above all, she loved the Lord, her family and friends, sewing crafts, especially English smocking, and a good bridge game.

A memorial service celebrating Nancye’s life will be held at 11:00 a.m. on Saturday, October 26, 2019, at Puckett Funeral Home in Farmville, Virginia. In lieu of flowers, donations may be made to the charity of your choice.

Patricia McKay Harden, 70, of Richmond, Virgin- ia, passed away peacefully at home on Wednesday October 16, 2019. She was... read more