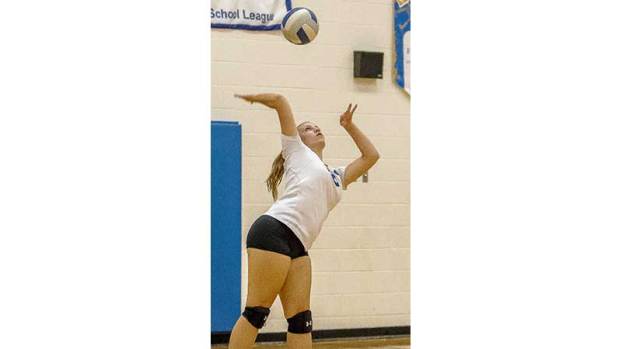 Lady Dukes prep for regional opportunity on the court

She expressed a perspective on the season as a whole that was inclined toward the positive, while acknowledging the room for growth.

“I think they could have done better,” she said. But she followed up that assessment with, “They’ve done a good job. We started off kind of shaky and then kind of picked up the momentum.”

Sutton noted that resilience in the face of setbacks has been lacking for the team. Looking back over the season’s results, she said that “it looks like we either win the first three (set of a match) or we lose the first three.”

But the Lady Dukes’ 3-2 road victory over Prince Edward County High School stood out to Sutton in a special way.

“I feel like that was probably the best that they’ve come together and played and kind of stayed focused,” she said.

The coach noted that pinpointing leaders on the team is difficult, but for a good reason.

“I have five seniors, and all of them do a great job, and even my freshman, she does a good job,” Sutton said.

The seniors include Jordan Cooke, Sydney Gilbert, Nikki Hurt, Elizabeth Newman and Danielle Suchomelly. The freshman is Allie Hurt, and juniors on the roster are Ebony Arauz, Angela Finchum and Janaia Trent.

“Those two typically drive the momentum, so pretty much they’re like my leadership on the floor,” the coach said.

Hurt, the lone underclassman on the team, brings a great deal of athleticism and experience.

“I’ve coached Allie in several sports, and she’s always been really athletic and able to rise up to her competition,” Sutton said. “So I already knew she was really good at volleyball, but with her doing travel ball, she has really leveled up, so it would be doing me an injustice to have her on the (junior varsity) team.”

Hurt serves as a second setter on the team, but the coach added that “honestly, Allie’s hitting performance is phenomenal.”

The tallest player on the team is Trent at 5 feet, 7 inches, which is short by volleyball standards,  but Sutton paid a huge compliment to her girls’ athleticism in the face of their small stature.

“I really don’t feel like height has been an issue at all,” she said. “Janaia jumps really high. Between Janaia, Allie, Jordan — all of them jump really high, so they do a great job blocking.”

The Lady Dukes begin play in the Region 1B tournament Nov. 7.

Sutton shared her goals for her team moving forward.

“So, the challenge that my girls have currently is just passing, which it’s fundamental, but it can also be mental, like a mental thing when you get out there,” she said. “Not to say that they can’t pass, but it’s challenging, when they have one or two errors, to come back from that.”

She also wants her team to work on coverage on the court.

They have some strong habits in other areas, however, that should serve them well in their postseason run.

“Their serves are really good,” Sutton said. “From the beginning of the season, I’ve really, really stressed serves to now where we’re at the end of the season, and typically every coach or every team that we play against, I always either hear from the refs or the other coach at how well they serve, because literally the girls can go a single match or a whole game and have maybe one or two errors serving, which is going to make the game, because you can’t play if you can’t serve. So, I stress that a lot.”