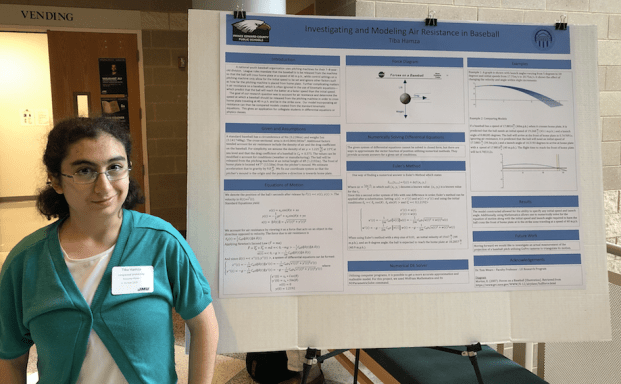 Tiba Hamza pictured with her presentation on mathematical modeling.

She worked on developing models for the flight of a baseball (pitched or batted, ignoring spin) that incorporated air resistance. Hamza used established methods that incorporate air resistance into projectile motion to set up a system of differential equations that models the flight of a baseball. Hamza used computer software to analyze the degree to which individual parameters (including temperature, air density, and initial speed) affect flight. Hamza’s work over the summer focused on the initial speed with which a pitch must be released in order to reach home plate traveling at a specified speed. Possibilities for future work include experimentally collecting data to test against her numerical models and investigating the degree to which reducing the drag coefficient on a baseball would affect the number of home runs hit.

The SUMS conference is held at James Madison University each fall and is in its 15th year. College undergraduates and high school students present mathematical and statistical research to their peers.

See you at the pole