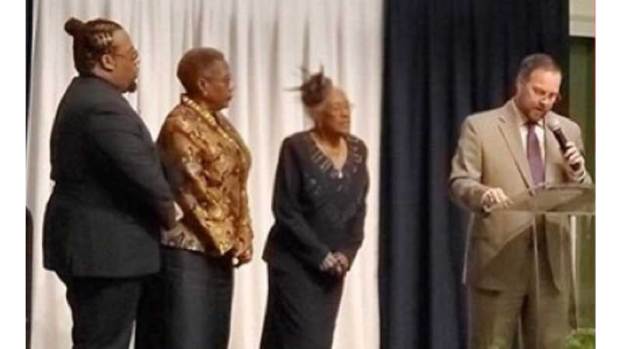 Bland-Reid Funeral Home celebrated 85 years of service to the community Sept. 21 with a banquet at Longwood University.

According to Operations Manager/Coordinator Warren Reid, the celebration was also held to establish the W.A. Reid Memorial Foundation. “From this foundation, we will release two scholarships per year,” he said.

The Jacquelyn N. Reid Art Scholarship is named after Jacquelyn Reid, who is the second generation of the family-owned business and has been with the company since 1993.

According to Warren, this scholarship will be given to a high school senior pursuing a college degree in the liberal arts.

This scholarship will be awarded to a student of the John Tyler Community College Funeral Service Program.

“We are dedicated to making sure that all the students of this area have a fair shot at resources for school,” added Warren. “We also want to make sure that those that have a passion for our industry thrive in it, as our founders did.”

In addition to the banquet celebration, Bland-Reid received letters of appreciation and acknowledgment from the Town of Farmville as well as Vice Mayor A. D. “Chuckie” Reid and Senator Mark Warner.

The funeral home was established in 1934, opening on Ely Street, now Griffin Boulevard. “In 1936 my grandfather, took over the business from the Bland family at the passing of J. Wesley Bland, the original owner,” said Warren.

Currently Warren’s grandmother, Gearl Reid, owns the business, and Warren’s mother, Jacquelyn operates the day to day business with him.

Warren says that many people spoke very highly of his grandfather, Warren A. Reid, but it was Rev. J. Sammy Williams that said it best, “Many people have walked in the doors of Bland-Reid, crying and in despair. But no one had died,” said Williams. “They were in need of help to get from day to day; homes, rent money, bill money, etc.”

Warren says that’s the kind of person his grandfather was. “He helped those in need,” said Warren. “And that was the business within the business.”

Alpaca Day on the farm