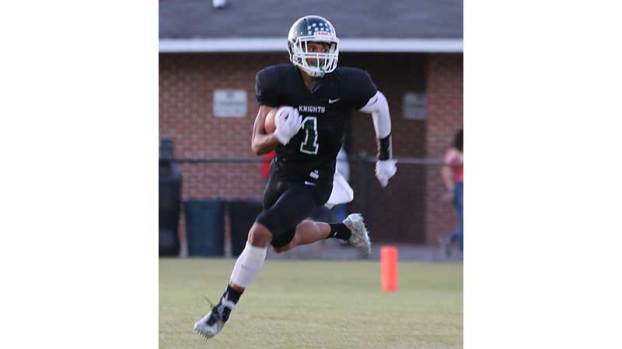 Coach’s game notes: The double wing offense of the Chargers will be one the Eagles will be familiar with Friday night as they have definitely seen it before. Central has been running it for years.

The Chargers run what the Eagles call “the superpower,” and the Chargers try to run the veer. Central features a big, very powerful running back named Daequan Lee, a senior.

Last week in their 56-50 triple-overtime victory over host Amelia County High School, the Chargers powered the Raiders straight down the field, running Lee right up the middle.

Some of Central’s running backs play only one way, so they come in fresh.

It will be up to the Eagles to shut down the Chargers’ double wing attack by stopping it at the line of scrimmage before it gets started.

The Eagles must press on without senior team leader and running back/linebacker Tai’Juan Williams, who made the decision to not play football anymore. Williams was a difference-maker for his team.

Coach’s game notes: The Knights have been preparing themselves this week for a Randolph-Henry team that runs a lot of the double wing on offense.

From experience this season, the Knights know they could see anything from an opposing team’s offense, and they have demonstrated the ability to adapt mid-game to significant changes in attack, but they have primarily been working on defending against what they have seen on film from the last few weeks of Statesmen games.

The Statesmen have also proven they can attack in the air, getting the ball to 6-foot-3-inch sophomore tight end Chris Redd, who weighs around 215 pounds.

Standing out for Randolph-Henry, defensively, is junior linebacker Camden Locey and Walton, who also plays linebacker.

The Statesmen are aided overall by two or three good-sized linemen up front on offense and defense.

The Knights enter this game fairly healthy. If they are fortunate enough to open up a big early lead on Randolph-Henry, they will aim to get younger players more experience.

5 takeaways from the Blue-White Scrimmage

BY CHRIS COOK LongwoodLancers.com At long last, Longwood University basketball is back in Willett Hall. More than seven months since... read more