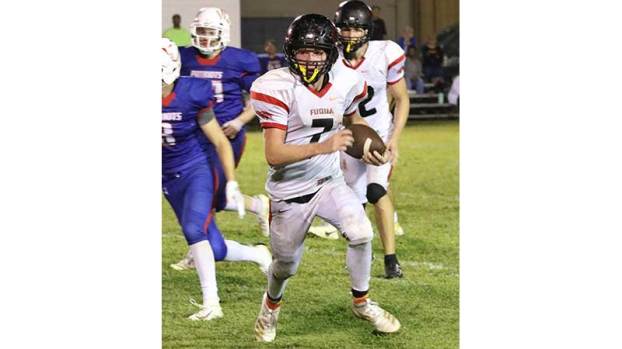 In a Friday battle between the varsity football teams ranked in the top two for Division III of the Virginia Independent Schools Athletic Association (VISAA), Fuqua School showed why it is No. 1, demonstrating poise after falling behind 28-20 to host Portsmouth Christian School by coming back to secure a 42-28 victory.

“Like I told the guys, I feel like we can go in the lion’s den and punch them in the mouth and take the teeth out of them,” Falcons Head Coach Ben Manis said.

His team has played in highly competitive games against talented opponents each of the past three weeks, and in each case, the clock hit zero with Fuqua on top.

“When they start getting down, they put a little bit more sense of urgency (to it), but they never hang their heads,” Manis said of his players. “They are fighters all the way through. It’s just a great effort all the way around.”

With the score tied 14-14 at halftime Friday, the Falcons avoided a double-digit deficit in the second half. They went up 20-14, but then the Patriots responded with a kickoff return for a touchdown, and the extra point gave them a 21-20 lead midway through the third quarter.

Fuqua’s offense was notable to respond, and with one  minute, two seconds left in the third, Portsmouth Christian extended its lead to 28-20.

Momentum had clearly swung in favor of the home team, but the Falcons were un– deterred, constructing a drive that ended with a touchdown run by junior running back Jackson Allen and a successful two-point conversion run by senior quarterback Elijah Warner to tie the game 28-28 with 11:55 left in the quarter.

The Patriots were looking to answer when Fuqua’s defense came up with a big play, forcing a fumble and recovering the ball with 10:13 to go.

With the chance to take the lead, the Falcons stalled early on in their drive, forcing a tenuous third-and-long situation.

In that moment, Fuqua leaned on the dynamic brotherly duo of seniors Matt and Drew Osborn. Drew launched a deep pass to Matt, who rose up into the air and brought the ball down for a crucial first down.

On the next play, Warner went deep on a pass of his own, successfully connecting with senior wide receiver Jaylen Hempfield. Not settling for a big gain, Hempfield kept the play alive and ran the last few yards into the end zone for the game-winning score.

Warner ran in the two-point conversion to give Fuqua a 36-28 advantage with 7:44 left in the game.

The Falcons defense clamped down on Portsmouth Christian during the ensuing drive, and on fourth down, the Patriots tried to complete a pass to a receiver defended by Matt Osborn, who has been piling up interceptions this season.

Manis noted that Osborn could have intercepted the ball but realized that a simple incompletion would trigger a turnover on downs, giving his team the ball in much better field position, so he inverted his hands and knocked the ball to the ground.

Accounting for his highly effective defensive play this season, Osborn said, “I’ve been playing a little more physical on defense, letting them make  the first move, stuff that coach has taught me — I give him most of the credit.”

Fuqua helped seal the vic– tory with its next drive that consumed much of the time left in the game and featured penalties on both teams, with most penalties called against a Patriots squad expressing frustration during the tense contest. Warner capped the long drive with a short touchdown run with 1:36 left in the game.

“We had a pretty good week of practice this week, and I think that was kind of the difference here,” Manis said.

He gave credit to Portsmouth Christian for being a strong team, and he noted that the Patriots showed the Falcons some things they had not seen on film.

“We adjusted well,” Manis said. “The kids are smart. I’ve never been around a group that just has this kind of innate intelligence to them.”

With the win, Fuqua improved to 5-0 on the season and strengthened its position as the No. 1 VISAA Division III team in the state.

“It just means that we’ve got a giant bullseye on our backs, so everybody is running and gunning, and we’ve got holes,” Manis said, holes that his team will look to plug as it prepares for hosting Massanutten Military Academy on Saturday at 2 p.m.

Longwood University fans eager to get their first look at the 2019-20 version of the Lancer men’s basketball team need wait... read more