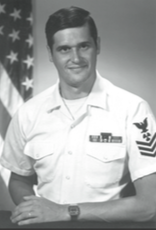 Ed Raitter was born on September 6, 1953 in Scranton, Pennsylvania. Before he turned 18, he joined the Navy and served a tour in Vietnam. When he came back to the states, he met the love of his life, Donna (Arrich), on base in Pensacola, Florida. Ed continued to serve during the Gulf War before retiring from the Navy after twenty years. Once he retired from the Navy, the Raitters made their home in Cumberland County, Virginia and eventually worked with Powhatan Ready Mix for twenty years.

Ed was always the strong silent type. Yet in the midst of the silence, he was consistently helping others in his own way of quietly handing rolled up money to someone in need. Ed had always planned on chasing Donna around the house with his walker, but on Friday, October 4, 2019, the Lord had other plans. Even in the midst of his death, he still made sure that others around him would be safe.

Ed is survived by his brother, Bob; his sweet wife, Donna, of thirty-nine years; his two sons, Eddie and Bryan (Samantha); and two grandchildren, Edie and Gryffin.

A service will be held on Friday, October 11, 2019 at 7 p.m. at the Calvary Chapel in Farmville. Puckett Funeral Home is serving the family.