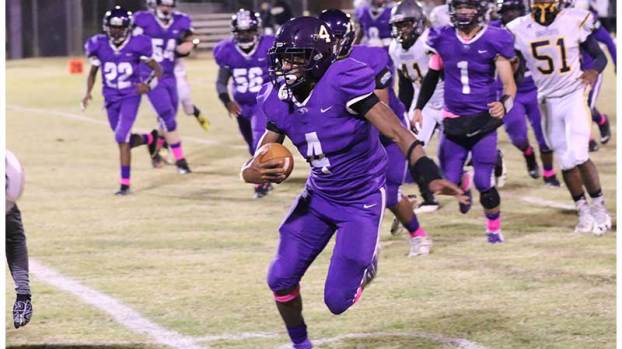 Prince Edward County High School’s varsity football team fell behind 6-0 early against visiting Bluestone High School on Friday, but the Eagles fought back to take a 14-6 halftime lead, and when the final snap had been played in their homecoming game, they had scored 50 unanswered points on the way to their second win of the season — a 50-6 victory over the Barons.

“I was very proud of the guys,” Eagles Head Coach Larry White said. “The whole homecoming week, they worked really hard. They really wanted this win. It felt good to get this second win because they felt that we’ve been in some ballgames, and we just came up short. And I told the guys, if we can get this one, it’s homecoming, let’s get a win at home because we haven’t won at home this year, so it felt good. And like I said, the kids worked really hard the whole week.”

Prince Edward sophomore quarterback Nate Reed finished the game with 19 carries for 184 yards and three touchdowns. He also went 5-for-10 passing for 24 yards.

In their previous game against host Central Lunenburg High School on Oct. 18, the Eagles scored 38 points in the second half. On Friday, Oct. 25, they put up 36 second-half points to transform a close game into a blowout win. White explained some of what happened during the halftime break that has helped lead to these results.

Lady Dukes prep for regional opportunity on the court