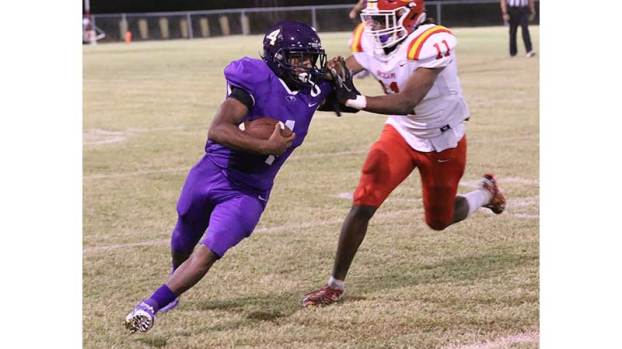 Goochland High School’s varsity football team held a 41-0 lead at halftime Friday night against host Prince Edward County High School, but the Eagles never quit, successfully putting points on the board in the second half against the outstanding Virginia High School League Class 3 Bulldogs in a 55-16 loss. “They came out the second half (and) played,” Eagles Head Coach Larry White said of his players. “The first half, we just didn’t play well. Goochland was a solid, very good team. Like I said, we just didn’t play well at all. I’ve seen some good things out of it. I’ve seen a lot of bad, but hey, we’re going to work on it.” He praised the play on offense of sophomore quarterback Nate Reed, who went 10-for-15 passing for 93 yards and one touchdown, and he also carried the ball 12 times for 65 yards and a touchdown. Junior running back Saybien Peterson, pictured above with the ball, finished with four receptions for 46 yards and a score and three carries for seven yards. White highlighted Prince Edward juniors Kiyou Jones and Davon Manson on defense. Manson had six tackles, and Jones had four tackles and assisted on a sack. The Eagles (1-5) visit Central Lunenburg High School on Friday at 7 p.m.

Tigers blown out at home