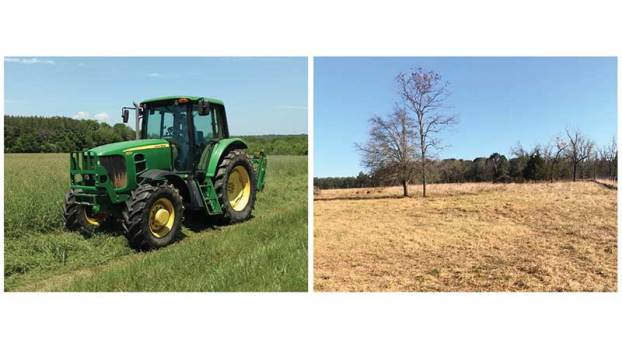 Jim Crews, a local Buckingham farmer, provided photos showcasing the difference in his hayfields and pastures between May and October of this year. Dry weather conditions have stopped the growth of seasonal fescue grass and caused difficulty for many area farmers.

While officials from multiple counties have reported that the current drought has not caused a substantial decrease in water supplies, farmers are reporting devastating impacts on pastures and hay.

Farmville Water Treatment Plant Superintendent Kathy Gagen stated in an interview with The Herald Tuesday, Oct. 15, “The flow in the river is 19 million (gallons per day), which is not bad. At the present time, we’re not looking at any water restrictions, but we are monitoring the situation. But with the cooler temperatures, it helps immensely. You don’t have that evaporation going on. During the extremely hot weather, the flow in the river was about 15-16 million (gallons per day.) That’s with the cooler temperatures and that little bit of rain that we received. We monitor the gauging station at the 45 bridge. We’re monitoring the flow daily.”

Gagen added that residents who are concerned about a possible drought can do their part in helping to conserve water.

“It’s just a good practice,” Gagen said. “Dripping faucets, excessive watering. It’s really common sense stuff, and they are anticipating a soaking rain Wednesday, I believe is what they said. All of that helps. I don’t want to minimize the drought, but it’s not impacting us that badly yet.”

“We have been monitoring for the last couple of weeks,” Whitus said. “Scott and I have had some conversation about when the right time would be to implement some voluntary water restrictions, but hopefully the rain will take care of that. We were very aware and watching and monitoring the situation very closely, but I think we’re going to be in good shape now.”

Mike Markley, director of utilities for Buckingham county, was also confident in his county’s water supply.

“Currently, we’re still in good shape,” Markley stated. “We still have water going out of the overflow. We are monitoring it. We check it daily, but currently we don’t have any restrictions. I understand we’re supposed to get a little rain tomorrow and I think Sunday, Monday and Tuesday if it holds up, but right now we don’t have any restrictions. We’re just continuing to monitor.”

“Hopefully, this drought is going to be over soon,” Markley added.

At the Buckingham Board of Supervisors (BOS) monthly meeting held Tuesday, Oct 15, the board voted unanimously to consider a drought designation in Buckingham County. County Administrator Rebecca Carter explained during the meeting that the drought designation would potentially help farmers in the county in filing a claim for loss of pasture and hay.

At the Oct. 15 meeting, the Buckingham BOS also voted unanimously to declare a county-wide burn ban. Prince Edward County declared a local emergency and issued a burn ban on Oct. 3 and the Cumberland County BOS issued a voluntary burn ban at its Oct. 8 meeting, making an additional motion to request that Governor Northam declare Cumberland County an agricultural disaster area due to the dry conditions.

Although local water supplies are holding up well during this dry season, the lack of rainfall in the last few months has negatively affected many local farmers. Buckingham local Jim Crews, owner and operator of Crews Family Farms, stated that it had been very upsetting to see the impact that the drought has brought upon his family farm’s pastures and hayfields.

“What it’s done to us, it’s pretty much just burned up our pasture field. We’ve been feeding hay to our cattle for about three weeks now. During our normal season, we don’t have to start feeding cattle hay until the middle of December.”

Crews stated that the beginning of September normally means the growth of fescue grass, a tall, cool-season grass that lasts until mid-December. The dry conditions have prevented the grass’ growth.

He added that the drought, which affects multiple states, is likely to cause an increase in the price of hay and will negatively affect farmers across the commonwealth.

Joseph Chandler, Jr., executive director for the USDA Virginia Farm Service Agency (FSA) that serves Buckingham and Cumberland counties, said that on Sept. 12 the County Emergency Board, made up of federal agencies like FSA and Virginia Cooperative Extension Services, reviewed local crops that may be impacted by the drought.

Chandler explained that Buckingham and Cumberland’s main affected crops consist of hay and pasture, and that dry conditions have severely impacted grass growing and prevented a fall cutting.

Chandler explained that the board believes that the county has incurred a loss of hay due to a lack of fall cutting. He added that many farmers that would normally sell excess hay to those lacking crop due to a lack of rainfall are more likely to keep the hay as a result of needing it themselves.

Chandler said that many farmers may not be aware of a resource that could help them during this difficult season. According to Chandler, the FSA has an electronic hay and grazing net ad service, eHay Net, an internet-based service allowing farmers and ranchers across multiple states to advertise the need for hay and additionally sell any excess hay. In addition, the Virginia Department of Agriculture and Consumer Services (VDACS) has a virtual hay clearing house that also helps to connect farmers with excess hay to those who need it.

Farmers in need of hay or those willing to sell any excess can learn more about the FSA’s website by logging onto https://www.fsa.usda.gov/online-services/haynet-tipnet/index. The VDACS virtual hay clearing house can be found at http://www.vdacs.virginia.gov/markets-and-finance-market-news-hay-feed.shtml.