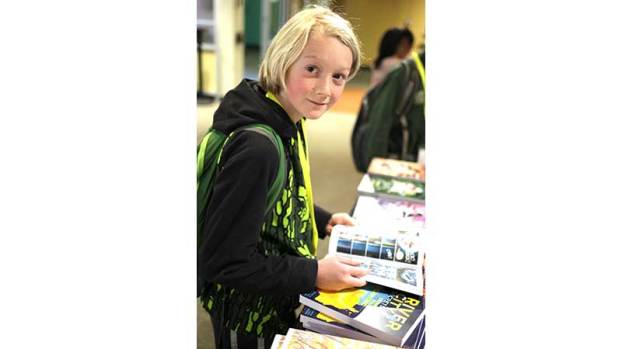 Ethan Hill picks out a book from the bookstore during the Virginia Children’s Book Festival.

Thousands of books being distributed and thousands of happy children were the focuses of the sixth annual Virginia Children’s Book Festival (VCBF) held Wednesday, Oct. 16, through Friday, Oct. 18, on the campus of Longwood University.

The VCBF is a free three-day event celebrating books, reading and children, with a mission to create a culture of literacy for the Commonwealth’s children, regardless of their circumstance.

This year’s event brought more than 20 authors and illustrators to life for thousands of children around the state. The Robert Russa Moton Museum and the Longwood Center for the Visual Arts (LCVA) also held events in conjunction with the VCBF.

Founded by Juanita Giles and Katie Snyder in 2011, the VCBF has grown into the largest children’s book festival on the East Coast.

During the event, the VCBF brings prominent children’s authors and illustrators to Farmville each year.

Katherine Paterson, author of Newbery and National Book Award-Wining Novels Bridge to Terabithia and Jacob Have I Loved, was this year’s special guest and spoke about her life and books during a workshop held on Friday.

Other workshops and events included a live mural painting by artist Monty Montgomery and illustrator Jay Cooper who showed children how to draw a robot.

The Robert Russa Moton Museum hosted the Hip-Hop in Children’s Literature workshop featuring Tiffany Jackson, bestselling author of Let me Hear a Rhyme and Malik 16, a rapper with a literary twist.

Leah Brown, assistant director of education for the Robert Russa Moton Museum, explained that close to 50 students who attended the event had the chance to compose their own Hip-Hop songs. “A lot of the students who attended already listen to Hip-Hop music and this allowed them to be a part of how hip-hop music is created and gave them the opportunity to meet and talk with creators,” said Brown.

In addition to the three-day event, the VCBF donates thousands of books each year, established libraries at juvenile detention centers, operates a mobile READcart, and provides programming for children with special needs.