A tale of persistence and what grows in the swamp 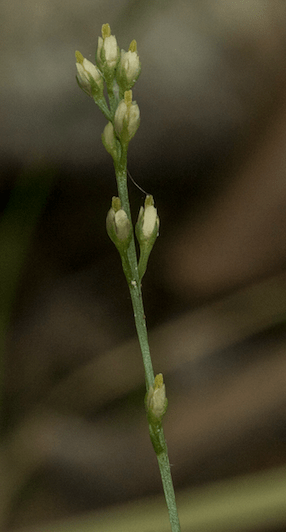 The Bartonia virginica pictured above and the autumn coralroot that I found on the edge of the swamp at Holliday Lake State Park were small, with intricate details that were difficult to photograph.

While mucking about in a swampy area at Holliday Lake State Park last month, I stumbled upon an odd looking little plant that I had never seen before. It wasn’t showy, and it definitely wasn’t large, but it was different and interesting. My hiking companion, the one who has forgotten more than I’ll ever know about native plants, said that it was Bartonia virginica, a member of the Gentian Family.

I tried taking some macro photos, failed, and then tried again with my cell phone. I returned the next day to try again, but there had been rain after I left the previous day. I remembered that we had walked through the swamp until we found a bottle gentian that hadn’t bloomed yet and that we turned north at about that point and walked to firmer land. No luck. I found the gentian and some autumn coralroot, but not the elusive B. virginica.

I returned the next morning to try again and once more there had been rain the previous night. Where I had walked the previous day was now under water and seriously mucky. I couldn’t find the bottle gentian. Finally, in despair, I decided to walk in a grid pattern back and forth from the edge of the swamp to the autumn coralroot. I was positive that the B. virginica was closer to the swamp than the autumn coralroot. All the while that I was pacing back and forth in the woods, there was a park employee working on a damaged lookout and probably laughing: “There’s that crazy woman with her camera again!”

I finally found the little plant, or rather, it just appeared at my feet. And so, I plopped myself down on some very wet ground and began trying to get at least one decent photo of this problematic plant. As you can see in the photo below, the results were passable, but not stellar. On the other hand, most of the photos of this plant that I’ve found online aren’t great either.

B. virginica is commonly known as yellow boltonia or yellow screwstemmy. It’s short and its leaves have been reduced to small scales. Looking at the tiny blooms through a magnifying lens shows that they look like typical gentians. Although the stem contains chlorophyll, research indicates that this plant is partially mycoheterotrophic. It’s also a facultative wetland plant, meaning that while it’s generally found in wetlands, it also occurs elsewhere. B. virginica is frequent in the Coastal Plain, but infrequent in the Piedmont and mountains.

All in all, B. virginica was a good find. A very good find. Sometimes the best ones aren’t the showiest. They’re the ones you work the hardest to get right.

CYNTHIA WOOD is a master gardener who writes two columns for The Herald. She can be reached at cynthia. crewe23930@gmail.com.