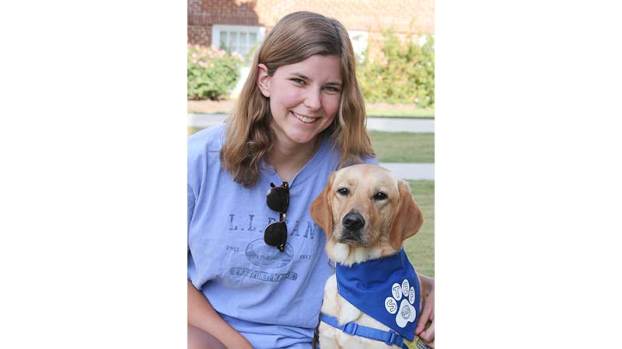 Ellen Tucker, a Junior at Longwood University is a puppy raiser for Canine Companions for Independence and currently trains Peru while on campus. (Photo by Crystal Vandegrift)

Ellen Tucker, a junior at Longwood University has taken on a new kind of activity.

Tucker is a puppy raiser for Canine Companions for Independence, a service that has been providing service dogs to people with disabilities since 1975.

Since last year Tucker began raising Peru, a Lab Golden Retriever at the age of eight weeks, and if you have been on the campus at Longwood University, you just may have seen Tucker and Peru.

In addition to being a puppy raiser and training Peru, Tucker has started the Service Dog Training and Education (STEP@LU) program at Longwood. The program is designed to educate the campus, as well as the public, about the impact of service dogs, and to spread awareness of service dog etiquette and respect. “As a group, we want to fundraise, support and promote awareness for service dogs,” said Tucker. “I believe education is an important aspect, so this is not just focused solely on the training.”

Part of the STEP@LU program teaches other students about disability awareness and knowledge of issues regarding the legal aspects of public access for assistance dog users.

When it comes to training, Peru, now 16 months old, has learned about 30 commands during her time with Tucker.

“These are basic commands, everything that you normally teach your pet dog, but we also have some more unique commands,” said Tucker. “Commands like dressed for putting on the vest and heal inside. She also learned the command lap that teaches her to put her paws on a persons lap. That’s a delivery command for someone in a wheelchair that they use later.”

Although Peru is on campus, she does not attend classes with Tucker.

According to Tucker, because she herself does not have a disability, and because Peru is still in training the pup is not allowed to be in a classroom setting. “Because I am training her for someone else and she is still in training, she cannot come to class with me,” said Tucker.

Tucker pointed out that one of the biggest things about being a puppy raiser is teaching the dog a routine.

“Individuals with disabilities are just like you and me; they go to work every day; they go to school every day … they have that routine. So, getting her to come with me, getting used to hey, we must sit down two hours, and there’s a bunch of people there and having to settle for that long is one of the hardest things to teach a dog ever.”

Since Tucker introduced Peru to campus last year and began the STEP@LU Program, the trend has taken off.

Currently, Carson, an eight-month-old canine, is on campus and being trained by Longwood student, Logan Levine.

As for Peru, in November she will leave Tucker and begin advance training to start specializing in her field.

Associate Professor of Biology Dr. Amorette Barber has been a devoted teacher during her eight years at Longwood University, a... read more