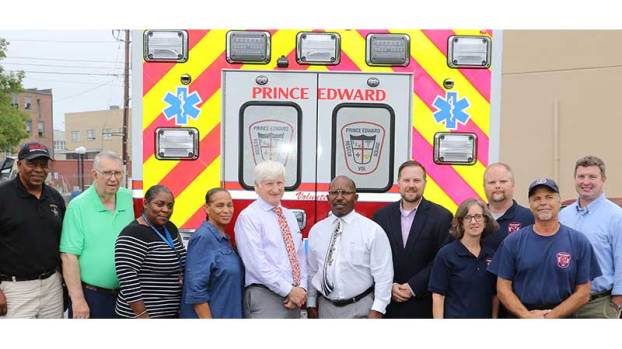 Prince Edward County and Farmville witnessed one of the first fruits of the investments recently made into sustaining the county’s Emergency Medical Services (EMS) with the delivery Friday afternoon of Prince Edward Volunteer Rescue Squad’s (PEVRS) new ambulance.

The Prince Edward County Board of Supervisors voted at its regular August meeting to adopt the ordinance establishing a countywide EMS District, and the board also voted to approve the following tax levies for that district: 1 cent for real estate and 10 cents for personal property, including machinery and tools but excluding merchants’ capital.

During the board’s regular July meeting, it set up the public hearings required to make those votes possible and also voted to authorize PEVRS to immediately purchase a new ambulance, the one delivered Friday.

In a July press release, the county stated that it “will provide immediate funding for half of the $250,000 total cost of the ambulance and the balance upon delivery. It is envisioned this cost will be paid from the revenue generated by the dedicated tax levy.”

Farmville 701 District Supervisor and Board Chairman Jim Wilck was among the government officials who gathered Friday in the parking lot next to the South Street Conference Center to look at the new emergency vehicle and pose for a photo commemorating its arrival.

“I think it’s great,” Wilck said of the new ambulance in a Sunday interview. “… And we have made the payments on it now, because it has been delivered.”

Just prior to the commemoration photo, PEVRS President David Norman shared how he was feeling on a day in which his squad received a new vehicle like this: “Very proud and very gracious to the community and the board to be able to support us and everybody to come together to one table and saying, ‘Hey, this is what’s best for the community, and we need to make this happen,’ and it’s happened, which is amazing. Very amazing.”

He said that once this new ambulance is ready for operation, it will be replacing Rescue 11 in the rescue squad’s fleet.

As for when the ambulance will be ready for use, Norman said, “Probably a month or less, tops. Probably a lot sooner than that, but with Murphy’s Law — you know how that works.”

He said the squad already has all of the equipment that will need to be installed.

“The main thing is we have to wait on Commtronics to come and put all the radios in,” he said. “Then it has to get inspected. So that’s the big hurdle we have to get over. Usually Commtronics is pretty quick, so usually it will be two weeks at max, but we like to say a month. It’ll definitely be less than that.”

Rescue 11 will remain active until the new vehicle is ready to go “just to make sure we have enough vehicles, enough ambulances to take care of the community,” Norman said.

He noted that the last time the rescue squad had received a new ambulance was two years ago. With the added funding coming the way of EMS agencies in the county, the hope is that PEVRS will receive a new ambulance every year moving forward.

“With the passing of the EMS budget and tax and stuff like that, it’ll help Prince Edward, it’ll help Meherrin, it’ll help all EMS in the whole county, which will be good, because it’s going to roll back to the community and our citizens,” Norman said. “So that’s the main goal.”