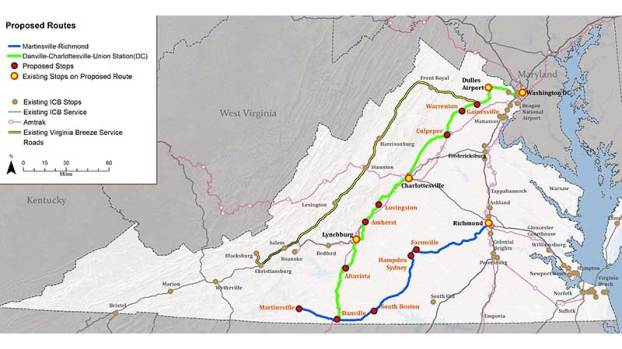 This graphic illustrates the two routes that are part of the proposed expansion of the Virginia Intercity Bus Service known as the Virginia Breeze. The route involving the services’ operation between Martinsville and Richmond will pass through Prince Edward County as highlighted by the references to Farmville and Hampden-Sydney. (Graphic courtesy of Virginia Department of Rail & Public Transportation)

A proposed expansion to the Virginia Breeze — the Virginia Intercity Bus Service — involves adding two routes, one of which would pass through Prince Edward County, giving area citizens another mode of transportation to Richmond and more.

Jennifer B. DeBruhl, who is the chief of public transportation with the Virginia Department of Rail & Public Transportation (DRPT), said the route that would pass through Prince Edward would run from Martinsville to Richmond.

She provided timing details in relation to the installation of the new route.

“DRPT will issue a Request for Proposals for a contract operator later this fall,” she said. “Following completion of the competitive procurement process, DRPT intends to initiate service in the corridor.”

Applying context for when this initiation of service will take place, she said, “DRPT plans to begin the new service in the late spring or early summer of 2020.”

She indicated that the cost of using the service is to be determined.

“The fare structure will be developed in coordination with the contracted operator, once procurement is complete,” she said.

Farmville 801 District Supervisor Pattie Cooper-Jones, who is head of the Board of Supervisors’ Bus Committee, expects the passenger fees to be reasonable and expressed excitement about the new route.

“I think it’s a fantastic thing,” she said. “I’ve heard for years since the bus closed down that people would like to have a mode of transportation that they could connect to Richmond, to the Greyhound station or to other locations, so that they would be able to travel without paying a fortune to people to give them a ride to Richmond. And I understand that this service is fairly reasonable, so I thought it would be a great thing if Prince Edward County could get involved and ask them to consider stopping here when they’re pretty much passing through us anyway. So I think it’ll be great for the citizens.”

DeBruhl explained how this new route will benefit the county and its residents.

“The new intercity bus service will provide a means for connecting rural, underserved areas with urban areas and other modes of transportation,” she said. “Many passengers of the existing Virginia Breeze service use it to connect to airports, Amtrak and other intercity bus services, such as Greyhound and Megabus, that have a presence in larger cities. DRPT envisions similar usage and benefits for the new route from Martinsville to Richmond.”

The route will also intersect, in Danville, with the other new route, which is set to run from Danville to Charlottesville to Union Station in Washington, D.C.

As for why a route including Prince Edward County was selected as one that Virginia Breeze should add, she said, “The study documented that a need existed to have intercity bus access to urban areas, as there is no commercially available intercity service in the region.”

She stated that the precise location of bus stops for the Martinsville-to-Richmond route have yet to be identified.

“DRPT is conducting outreach to localities and agencies in the corridor to identify potential stop locations,” she said. “DRPT will work with the contracted operator to identify and confirm each stop location prior to the start of operations.”

Cooper-Jones shared her idea for an ideal stop in the Town of Farmville — the Valero on South Main Street.

“It would be accessible to pretty much everybody in the town, and that’s a store that’s open 24 hours a day, and it’s handicap accessible,” she said. “… So I thought that that would be a great location that it could stop at.”

The bus and its passengers are expected to make quite a few trips through Prince Edward County once the route is active.

“The study estimates that the new route from Martinsville to Richmond will generate 5,500 passenger trips annually,” DeBruhl said.

She noted that a combination of passenger fares and FTA Section 5311(f) funds will cover the cost to operate the service.

“There will be no state funds used to operate the service,” she said.

Virginia Credit Union has made a $2,500 contribution to the Southside Center for Violence Prevention (SCVP) following the recommendation of... read more