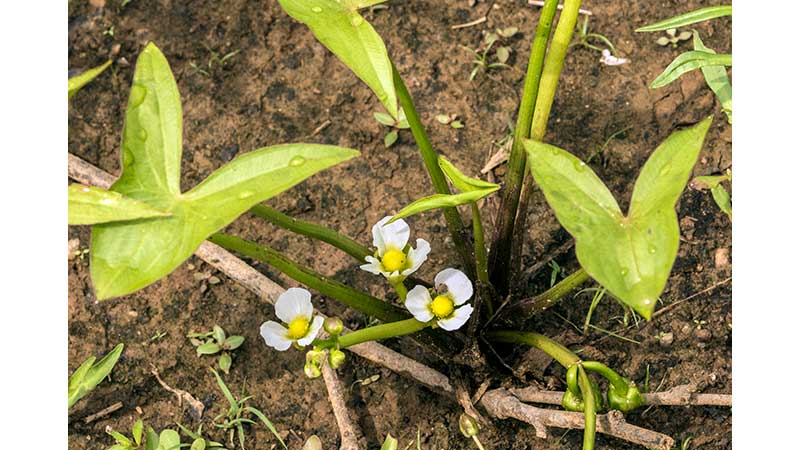 There are 12 species of Sagittaria in Virginia, but long-lobed arrowhead, is an uncommon one.

In the early days of the commonwealth, the naming of rivers was arbitrary. Settlers along a particular waterway named it whatever they pleased. For example, above Richmond, the mighty James River was once known as the Fluvanna. Eventually local names disappeared, and rivers had one name from start to finish. Well, except for the Roanoke, which still changes its name in the middle of its wandering through the state. From Leesville Dam to the mouth of the Dan River, about 80 miles, it’s still known as the Staunton River. The name honors Lady Rebecca Staunton the wife of Governor William Gooch. William Byrd recorded the name Staunton in 1728 when he was surveying the boundary between North Carolina and Virginia.

Several weeks ago, I spent most of a hot, humid day exploring the shoreline in the area where the Staunton and Dan Rivers meet, an area now overtaken by the creation of Buggs Island Lake. There’s a nice little park there that’s perfect for fishing, boating and even a bit of hiking. Oconeechee State Park isn’t far away and has even more trails. Within about 10 minutes, I had found several interesting plants – halberd leaf hibiscus (Hibiscus laevis), two species of sneezeweed (Helenium flexuosum and H. amarum), lots of Indian chickweed (Mollugo verticillata), and some water willow (Justicia americana). While the halberd leaf hibiscus was a nice find, my overall reaction was that it was just too hot and humid to spend much time on a bunch of common, even weedy species. Wrong.

While I was walking along the edge of the water, however, I nearly stepped on what I initially thought was just another Sagittaria, probably S. latifolia. But something about it didn’t look quite right, so … never mind the heat and humidity, I sat on the wet sand and checked my trusty Flora of Virginia phone app. White flowers with three petals with yellow at the base? Yes. Thick pedicels? Yes. Inflorescence shorter than the leaves and decumbent rather than upright? Yes. It wasn’t S. latifolia, but S. calycina Engelm., long-lobed arrowhead, a rare species that grows along seasonally exposed shores and in mudflats. It’s known only from populations along the Roanoke River (called the Staunton River where I was), as well as single collections in Lee, Loudon and Prince Edward counties. It was an unexpected and great find.

Just to make sure that I wasn’t hallucinating, as soon as I got home, I contacted someone who knows far more than I do about plants. He checked my photos and suggested a return visit. On another equally hot day, we went back to the little park along the river. The plant was still there, and yes — my identification was correct.

We celebrated by taking lots of photos and moving on to an area in Halifax that had an unbelievable number of rare plants. Suddenly the heat and humidity were forgotten. We were like two kids in the proverbial candy store. You never know what you might find, even on a hot, humid, late summer day.

Cynthia Wood is a master gardener who writes two columns for The Herald. She can be reached at cynthia.crewe23930@gmail.com.

The difference in buttonweed