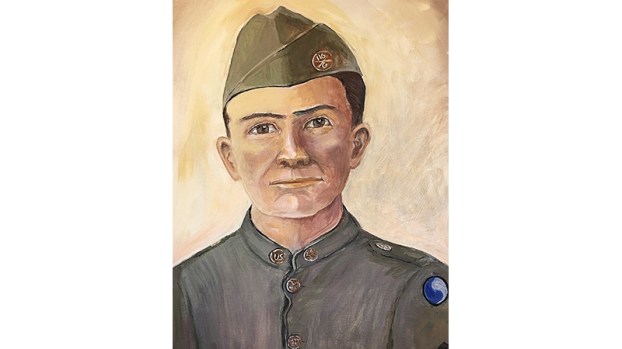 John “Jack” Garland, of the Farmville Guard, served with the Army in World War I and was killed in action on Oct. 8, 1918 during the Battle of the Meuse Argonne in France. His new portrait from an old and tattered photo will be on display during the Centennial Celebration. (Portrait by Marths Louis)

The Farmville American Legion “Jack Garland” Post 32 will hold a Centennial Celebration on Sept. 19 from 4-6 p.m. at the Farmville Train Station.

Private John “Jack” Garland was a member of the Farmville Guard Unit and served with the Army AEF in France in World War I. He was killed in action on Oct. 8, 1918, during the Battle of the Meuse Argonne.

“On Sept. 4, 1919, The Farmville American Legion was first organized, and the Town shut down that day at 4 p.m. and celebrated the hometown men who had served during the war,” said Ed Dunn, Vice Commander of Post 32.

During the centennial celebration, there will be a new portrait dedicated, and on display of Jack Garland and the artist, Martha Louis, will be on hand to answer any questions.

According to Dunn, during this past year, Post 32 was the driving force in having a World War I Memorial placed on the Prince Edward Courthouse lawn which was dedicated in 2018 on the 100th anniversary of the Armistice that ended WWI.

Post 32 also joined with the Piedmont Area Veterans Council (PAVC) and Veterans of Foreign Wars (VFW) Post 7059 in celebrating veterans of the Greatest Generation on the 75th anniversary of D-Day.

In the past 12 moths Post 32 has provided flag folding ceremonies at funerals of deceased veterans, placed flags on veteran’s graves in Trinity Gardens on Memorial Day, and helped hundreds of veterans apply for benefits in conjunction with the PAVC.

According to Dunn, delegates who attended Boy’s State will share their experiences during the celebration.

Dunn also noted that the Legion will continue to grow and has plans to establish another organization.

“We have great ambitions to continue revitalizing our Post and to serving our community and its veterans and hope to establish a Squadron of the Sons of the American Legion in Farmville,” added Dunn.