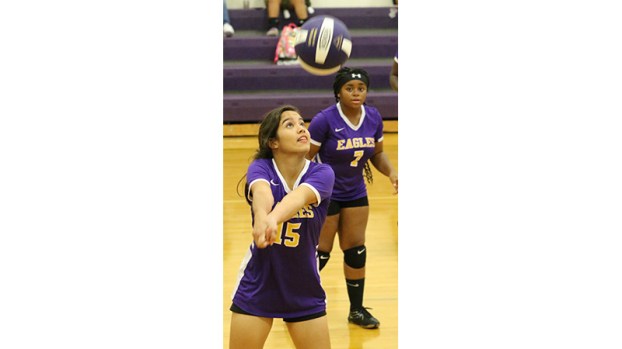 After a 2-1 start to the year, Walker said, “I think they’re going to have a great season. So far after the games, the referees have complimented them on how great they play. And they move really well. They rarely let balls drop, which is a plus. Since our setter is so young and she is new as a setter, I wish we could get that ball to her a lot more, because
if we could, we can set Makayla Morris up, who is one of our strongest hitters on the team. … I think we’re going to do really well this season in the James River District.”

The freshman setter she referred to is Brooke Conwell.

Morris, a senior outside hitter, “can hit from anywhere, actually, on the court, but she prefers to hit on that left side,” Walker said. “That’s her strong side.”

The coach noted that Morris is the tallest player on the team, though not especially tall by volleyball standards.

“We are lacking in height, but I think what we lack in height, we do have some really strong girls who have a lot of heart, though,” Walker said. “One of my shortest girls, who is a sophomore, Kyla Edmonds, when I put her on the floor, I can guarantee that if that ball is near her, she’s going to get the ball. And she plays front row too, and if she can get a good pass or a good set up front, she’ll go and she’ll take that ball and hit it.”

Fuqua School’s varsity football team looked like it was headed for a humbling blowout home loss in the first half... read more