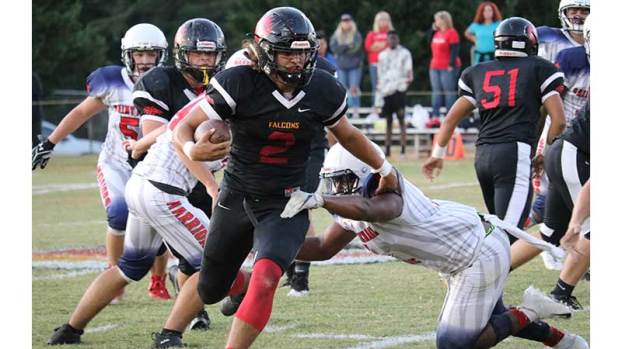 Falcons come back to top Warriors, 43-41

“We’ve got to stop doing that for my own health,” Fuqua Head Coach Ben Manis said with a laugh.

On Sept. 13, the host Falcons came back to beat Atlantic Shores Christian School 32-31. The Seahawks are a strong Virginia Independent Schools Athletic Association (VISAA) Division II team, meaning they draw their players from a larger student body than those found in Fuqua’s Division III setting.

But the Warriors proved Friday night that plenty of challenges await the Falcons in VISAA Division III.

“That was a heck of a team,” Manis said of St. Michael. “I’m not going to take anything away from them either. When you’ve got the Fredericksburg Area Player of the Year from a couple years ago on your team, that kid was a great athlete.”

He was referring to Warriors senior quarterback Jalen Smith.

Fuqua might have had an opportunity to avoid a comeback scenario, however, if it had taken better care of the football, the coach noted.

“Early in the game, we kind of shot ourselves in the foot,” he said. “I assumed (our) quarterback was trying to throw the ball away on a screen pass, and he way overthrew the receiver because he was covered, and their corner just happened to be kind of in no-no land, and he came up with it.

“And then we had a bubble pass, it was going down the sidelines, and we fumbled,” Manis added. “And then just, really, turnovers in the first half killed us, and then the second half we kind of cleaned it up.”

Manis cited that then, his squad went up by two scores, taking a 43-33 lead.

Senior quarterback Elijah Warner scored on a two-yard run for the go-ahead touchdown, and he was able to add to it later with a 12-yard scoring run.

St. Michael rallied, but Fuqua was able to hold off the Warriors for the win.

“I don’t think we’ve played our best game yet against a good opponent,” Manis said. “I guess we’re saving that for the last couple games of the season.”

The Falcons were led on offense by Warner, who went 11-for-27 passing for three touchdowns and one interception. He also had 17 carries for 73 yards and three more touchdowns, and he had two catches for 38 yards.

Leading the way on defense for Fuqua were Drew Osborn, with 10 tackles, Allen, with 10 tackles, and junior cornerback Hayes Barton, with two tackles, one interception and one blocked punt that set up a short field for the offense to score.

Manis said Friday’s game could very well have been the game that decides who becomes the Battlefield Conference champion, and he said his team could meet the Warriors again in the VISAA Division III state playoffs.

The Falcons (4-0) visit Portsmouth Christian School on Friday at 7 p.m.