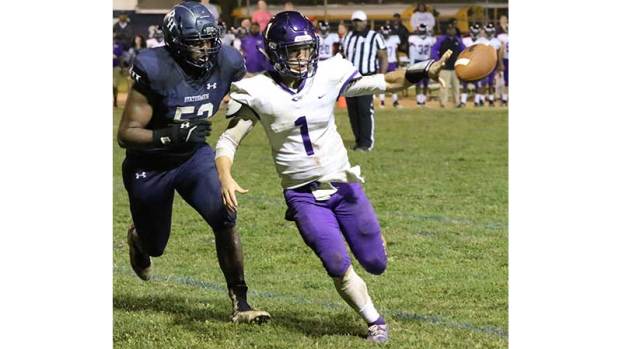 Prince Edward County High School sophomore quarterback Nate Reed pitches the ball at the last second to senior running back T.J. Williams who, a second later, carried the ball across the goal line for a touchdown against host Randolph-Henry High School on Friday night. The Eagles achieved their first win of the season, 54-30. (Photo by Titus Mohler)

Toward the end of his postgame interview, White became silent for a moment mid-sentence, and then shortly thereafter, he said with a smile, “I’m excited about this first win.”

Prince Edward had been scoreless in its first two games this season, shut out by a combined 88-0 score. But the Eagles made up for lost time Friday night, and they set the tone with their preparation.

“All week, these guys have been working hard — from Monday all the way to Thursday,” White said, standing on the field in Charlotte Court House shortly after the game. “And they didn’t have school today, so they came in early, and we went over a lot of stuff when we got here. I’m enjoying the win, but it wasn’t pretty, but I’m going to take it.”

For more on Prince Edward’s big win, see Wednesday’s edition of The Herald.