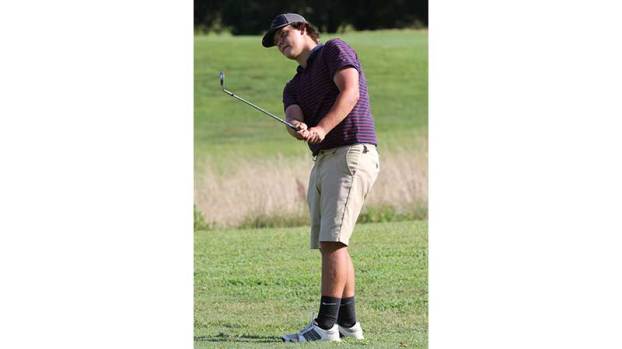 Dukes progress on the links

The Cumberland County High School varsity golf team is a little less than four-and-a-half tri-matches into the 2019 season, and the squad carried a 3-5 overall record into its Thursday competition at Crewe Country Club.

One tri-match was halted after three holes due to thunderstorms and will be completed at a later date, resulting in the fractional amount completed by the Dukes.

In a Wednesday interview Cumberland Head Coach Monroe Preston was positive overall about what his team has shown him thus far.

“I feel the progress they’ve made in the last couple of weeks was OK,” he said. “At The Manor (Golf Club) yesterday, they shot 205. I thought that was pretty good and some improvement, and I think they can improve on that.”

The 205 result was the Dukes’ lowest nine-hole team score of the season. While the score fell short of Goochland High School’s 190 in Tuesday’s tri-match, it defeated host Prince Edward County High School’s 218.

Preston confirmed his goal near the beginning of the 2019 campaign was for his team to produce a score less than 200 by the end of the season. The 205 score shows the Dukes are already close.

“I think it could come at any match, and I think once they do that and their confidence goes up that at the end of the season, maybe we can do something else,” Preston said.

The coach said that the player on his team who has been standing out the most to him has been sophomore Jack McCutcheon.

McCutcheon shot a 51 on Tuesday.

Cumberland’s low medalist on the day was junior Thomas “Tad” Bryant III, who shot a 45.

“He’s another one that’s showing progress,” Preston said of Foster. “His scores are going down. I expect that his will continue to go down as well.”

Rounding out the Dukes’ top four scores Tuesday was sophomore Michael Ward Jr., with a 57.