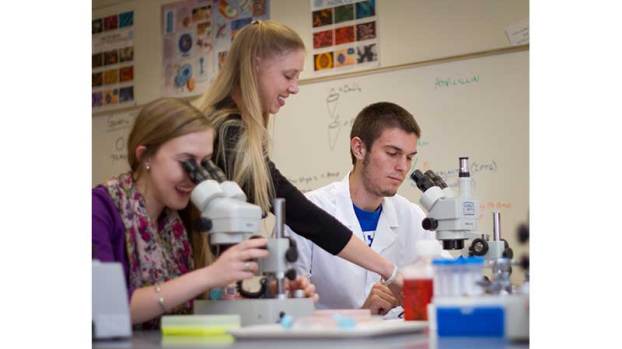 Longwood University Associate Professor of Biology Dr. Amorette Barber works with students in the lab. Barber and Longwood were awarded a U.S. patent in April. It was a product of the work she has done in her research lab — with student involvement — to develop more effective cancer treatments. (Photo courtesy of Longwood University)

Associate Professor of Biology Dr. Amorette Barber has been a devoted teacher during her eight years at Longwood University, a press release noted. She has also been busy in her research lab, where she involves students in her work to develop more effective cancer treatments. That work — a feat of genetic engineering that programs T cells in a patient’s own immune system to infiltrate and destroy cancer cells — paid off in April when Barber and Longwood were awarded a U.S. patent.

Officials highlighted in the release that Barber’s treatment isn’t the first to employ T cells against cancer, but it is significantly different from other methods under development.

“Currently these treatments target only one or very few types of cancer,” Barber said in the release. “The T cells we engineered are effective against 80-85 percent of cancers: pancreatic, breast and colon cancer, melanoma and many more. Harnessing the immune system for cancer treatments really reduces the side effects, and it’s better at treating the cancer.”

Barber said all of the research to develop the patented treatment was conducted at Longwood, with students getting hands-on lab experience in some of the early phases of the project, the release cited.

“Undergraduate students really don’t get that kind of opportunity everywhere,” she said in the release.

Officials stated in the release that Barber has sent several students on to prestigious graduate programs, including one student who graduated in 2018 and is now working on a doctorate in immunology at the University of Chicago.

The next step in taking the treatment out of the lab and into use with patients is to partner with a pharmaceutical company or a larger institution to begin clinical trials, the release noted. That will probably take another five to eight years, Barber said in the release. She is exploring such a collaboration with the esteemed Cleveland Clinic, which she said has a “whole cell therapy unit and collaborates with other companies.”

This is not Barber’s first experience with patent-worthy work, officials highlighted in the release. As a doctoral student at Dartmouth College, she worked closely with a faculty member who was the lead on a project that also was awarded a patent.

“It’s really rewarding and exciting to receive a patent for research that I led and that potentially will help so many people,” Barber said in the release. “A lot of my family members have dealt with cancer. My grandfather passed away from cancer when I was young. My grandmother had three types of cancer. And my childhood best friend’s mother died of cancer when I was in high school. I think most families are affected by cancer these days.

“Immunology is my love. It’s fascinating and beautifully orchestrated. I couldn’t ask for more than to be able to take something I love and use it to help society tackle such a health burden.”

A man was hospitalized following a single-vehicle accident Aug. 27, that occurred in the 700 block of Main Street, Farmville.... read more