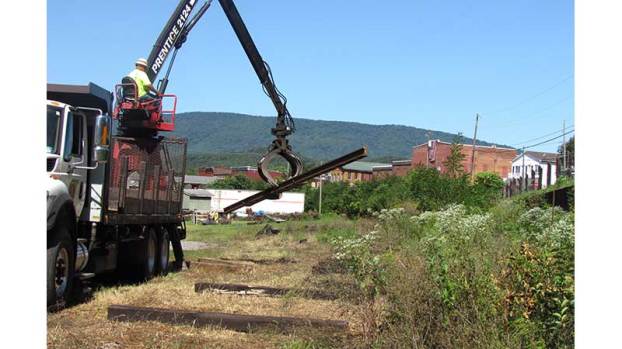 Railroad switch parts are being unloaded at C&O Heritage Center Museum in Clifton Forge. The switches were a donation from Buckingham Branch Railroad.

Two sets of railroad track switches have been donated to the Chesapeake & Ohio (C&O) Historical Society by the Buckingham Branch Railroad (BBRR). They were delivered by BBRR to the society’s rail yard on Aug. 23. The switches are to be used in future expansion of the C&O Historical Society’s track in its rail yard and Heritage Center museum site.

These valuable pieces of rail are vital to the plan and would be prohibitively expensive for the society to purchase new. Switches are used to move trains from one track to another. The donation is an important step forward in the society’s strategic plan.

The BBRR also leases and operates the former C&O Railway’s mainline between Charlottesville and Richmond. Handling local freight with its own trains, BBRR also hosts CSX Transportation trains as well as Amtrak passenger service over the Clifton Forge-to-Charlottesville portion of the rail line. The company’s headquarters is in Dillwyn, but main mechanical shop, as well as other operational facilities, are in Staunton.

The Chesapeake & Ohio Historical Society is one of the country’s largest railroad history organizations, headquartered in Clifton Forge. Its staff of six operates one of the largest railway history archives in the United States. The society also runs a museum with displays of former C&O Railway locomotives, rail cars and a history museum in the former C&O Railway freight station in Clifton Forge.

The Chesapeake & Ohio Historical Society is a nonprofit corporation dedicated to interpreting the American Railway experience using C&O Railway’s history through drawings, documents, and artifacts which the Society collects, preserves, and makes available to as broad an audience as possible.

Nearby Lunenburg County is home to one of the five teams that constitute the Virginia Communications Cache (VCC), and Lunenburg... read more