Aileen Huskey Crowder, a resident of Elizabeth House, passed away peacefully on September 3, 2019. She was reunited in Heaven with her husband of 55 years, George S. Crowder. Aileen was the last of nine siblings of Charlie and Josie Huskey to leave this Earth. 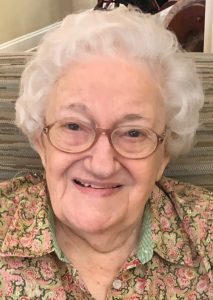 Aileen was known by many for her talented sewing skills, infectious laugh and love for her precious cat.

She is survived by her only child, Charlene T. Crowder-Taylor and her husband, Thomas G. Taylor of Mechanicsville. Also surviving are her grandson, Robert Griffet, Sr. and his wife, Veronica; six great-grandchildren; and 14 great-great-grandchildren.

Arrangements were by the Central Chapel of Bennett Funeral Home in Richmond. The graveside service was conducted by Bob Burger, longtime friend of the family, with Conner-Bowman Funeral Home, Rocky Mount, Va.