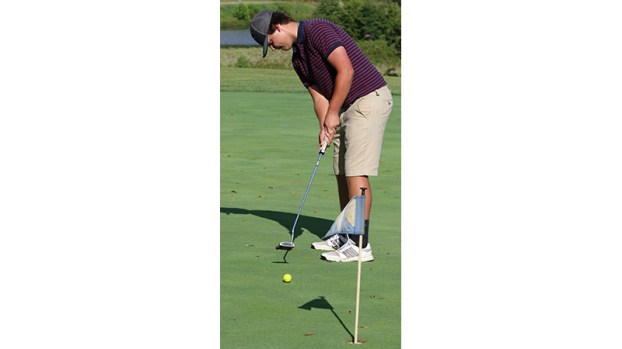 Cumberland County High School junior Thomas “Tad” Bryant III is expected to be his team’s No. 1 player this year. (Photo by Titus Mohler)

‘The swings look good’ for the Dukes

“I’ve got some good players,” he said. “They’re good kids, so I’m thinking that we should win maybe a couple more than we did last year.”

Reflecting on the 2018 campaign, he said, “I believe we won two last year.”

The Dukes will face tough competition, however. Speaking Wednesday, prior to Cumberland’s season opener Thursday, Preston said he was not sure exactly how his team would compare to 2019 James River District foes since the Dukes had not played yet.

“The work that they’ve put in and the swings that I’ve seen, the swings look good,” he said of the Dukes. “I think they should score better than what we’ve been scoring in practice, but we’ll see tomorrow, and then I’ll have some idea how it comes out.”

“Thomas is the oldest, and he’s probably going to be my No. 1 player,” Preston said. “No. 2 is going to be Calvin. He missed some practices because he works. He does a lot, but he’s probably got more of the leadership initiative in him, just a natural leader. He takes over sometimes and just leads the team.”

As for who will fill the No. 3 and No. 4 spots, the coach said that might shuffle.

White set to run with the Dragons