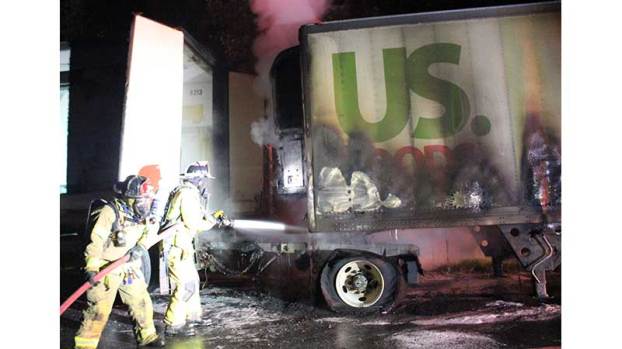 Area firefighters work busily Monday evening in response to a fire that had erupted in the rear trailer of a US Foods double tractor-trailer. The driver discovered the fire burning behind him and disconnected from the trailers while he was traveling westbound on U.S. Route 460 in Prince Edward County, a Farmville Fire Department official said. (Photo by Dan Pempel)

A fire ignited in the rear trailer of a double tractor-trailer Monday evening, forcing the driver to disconnect from the trailers while he was traveling westbound on U.S. Route 460 between Dowdy’s Corner and Buffalo Creek, a Farmville Fire Department (FFD) official said.

FFD 1st Lt. Travis Finch, who was the incident commander, confirmed there were no injuries to the driver or firefighters.

He said FFD received the call at 10:29 p.m. and later noted that it was a US Foods truck that the department responded to.

“I believe it was the refrigerant unit on that (rear) trailer that caught on fire,” Finch said. “That’s where the most fire was. It started there. … It really wasn’t a whole lot more than that, but it burnt the rear trailer up. It was pretty bad.”

Describing the incident, he said that after the driver saw the fire behind him, he disconnected his vehicle from the trailers and “pulled out of the way. We arrived on scene. It was us and Prospect (Volunteer Fire Department). Prospect brought their tanker; we brought our engine. (We) had this fire out, I would say, within 5 to 10 minutes. … We were just hitting hot spots, making sure nothing was still on fire or there was nothing too hot that would probably catch something else on fire.”

He estimated that FFD remained on scene for an hour to an hour and a half. He said Virginia State Police and the Prince Edward County Sheriff’s Office responded and directed traffic.

Three Girl Scouts spent the summer collecting school supplies. On Wednesday, after months of hard work, they were able to... read more