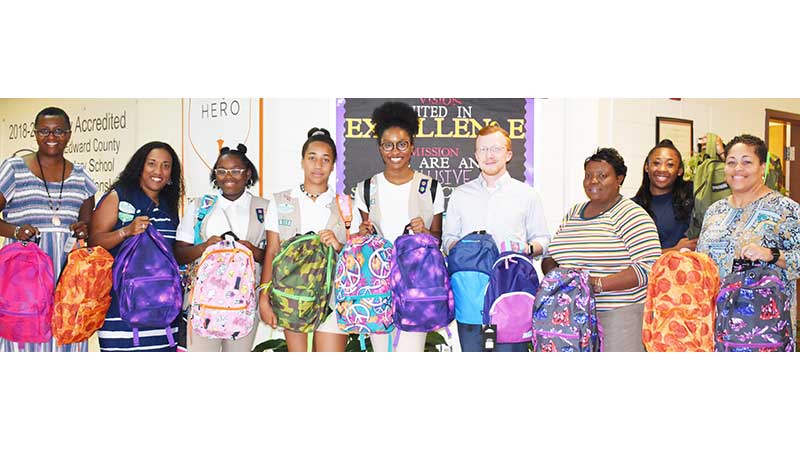 Three Girl Scouts spent the summer collecting school supplies. On Wednesday, after months of hard work, they were able to deliver the donations in person.

Longwood University Department of Social Work Professor Dr. Erica Brown-Meredith worked with the scouts on the project. One scout, Adyson Meredith, is her daughter.

The scouts were working toward a silver badge, which is an award achieved through creating a sustainable and community-centered project that helps children close to the scout members’ ages.

Brown-Meredith said each of the three Girl Scouts are honor roll students and have had leadership positions in the Girl Scout troop and in their communities.

In order to collect backpack and school supply donations, the Girl Scouts needed to reach out to area businesses, introducing themselves and telling them about the project. In addition, the scout members reached out to the Walmart locations in Farmville, Powhatan and Chesterfield.

Brown-Meredith said Joy, Payton and Adyson got permission to collect donations at the outside of the stores. They did so sometimes during intensely hot weather.

Brown-Meredith said the three scout members made sure to fill backpacks with specific supplies, depending on the needs of the students.

She said the backpacks would be distributed based on need.

Brown-Meredith said she wanted to focus on Prince Edward County Public Schools due to its extensive history of education, particularly for people of color. She said the opportunity for Joy, Payton and Adyson to work on something beyond themselves has been rewarding for everyone involved.

“Community engagement is so important to us. We are just thrilled that Girl Scout Troup 3152 and their leaders from Longwood University chose to partner with us. We are grateful and look forward to future partnerships.”

Round Up program pays big dividends