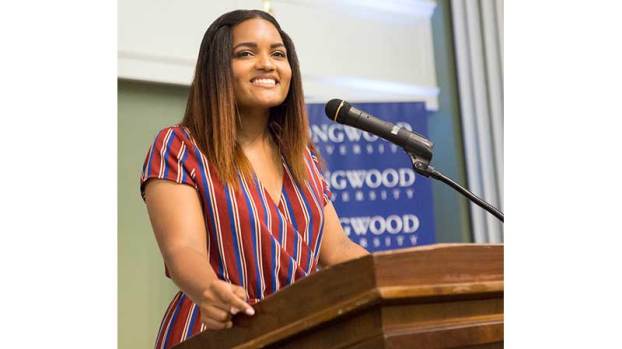 Senior Haleigh Pannell was elected earlier this year as the Student Government Association (SGA) president at Longwood University, making her the first woman of color to hold the position, a university press release highlighted Monday.

It was just after midnight when Pannell received the news that she’d been elected, the release noted. Overcome with excitement, she woke up her parents to share the good news.

“They said, ‘We’re so happy for you, but why didn’t you wait to call us in the morning?’” Pannell recalled in the release. “I was like, ‘I’m sorry, but I wanted you to be the first people to know.’”

Pannell, a psychology major with a minor in neuroscience and a member of the Cormier Honors College for Citizen Scholars, was sworn in as SGA president at the end of the spring semester, the release stated, but her term begins in earnest this week as the new academic year kicks off with the start of fall semester classes.

Officials in the release noted that Pannell being the first woman of color to hold the position of Longwood SGA president is a role she does not take lightly.

“I love seeing firsts,” Pannell said in the release. “It’s very meaningful for me to be a role model and hopefully inspire others to strive for leadership positions.”

Among her priorities as SGA president are adding a first-generation representative and continuing the work of planning a multicultural center on campus, the release cited. Another goal is to work with dining services to develop a way that students can donate unused meal swipes to Elwood’s Cabinet, the student supplemental food pantry that SGA helped to get off the ground last year.

“My main platform is inclusivity,” she said in the release. “I want everyone to feel that Longwood is their home away from home, and I want to make the campus as inclusive as possible. We made excellent strides during the last academic year, and I want to continue that.”

A native of a small town in Maryland, Pannell was recruited to play lacrosse at Longwood, officials stated in the release. Her father went to Virginia Military Institute, and she had family members who were familiar with Longwood. All it took was one visit, and she knew Longwood was where she wanted to spend the next four years.

“I came here on a recruiting visit and fell in love as soon as we drove into Farmville,” she said in the release. “I saw people hanging out on Wheeler Mall and Stubbs Mall. I very quickly realized this is a very close-knit community of people that supports you and that you can lean on.”

The release noted that Pannell first became involved in student government her sophomore year, when she was appointed as a senator. The next year she was elected president of the junior class council. She played lacrosse in the fall of her freshman year but decided to give it up because she wanted more time to devote to other student activities and organizations.

As a sophomore, Pannell founded Promise 16, a student organization that aims to bring greater awareness to the issues of student mental health and suicide prevention, the release cited.

She credits three of her mentors at Longwood with helping her become more confident and pushing her to seek leadership roles on campus, the release continued. Those mentors are Director of Multicultural Affairs Jonathan Page, Assistant Director of Leadership Development Quincy Goodine and Kevin Napier, coordinator for recruiting and outreach for the Cormier Honors College for Citizen Scholars. Napier was SGA president when Pannell first became involved in student government.

Officials in the release noted that Pannell’s initial career goal was to become a therapist. While at Longwood, however, her interest in public policy has grown as she has taken on increasing leadership roles. She is now considering how she can impact public policy and do advocacy work and would like to pursue a Ph.D. in social policy after graduation.

“I am thankful for the endless number of possibilities to explore leadership here,” she said in the release. “From the time I arrived, I have never stopped learning how to be a leader. I can’t wait to learn more and get to work for the student body this next year.”

As Monday, Sept. 2, is Labor Day, there will be no residential or business garbage pickup, no cardboard pickup and... read more