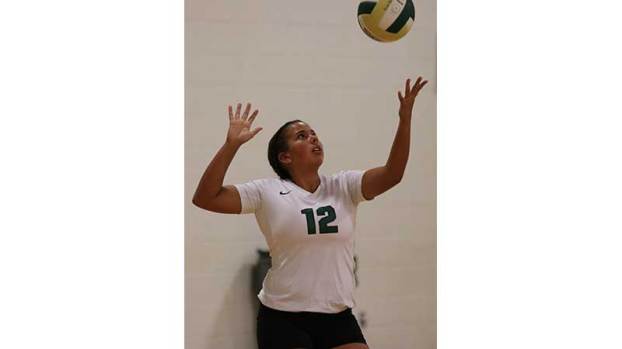 Buckingham County High School’s Mia Garrett returns to the court this season as a senior and is expected to be a key contributor at the setter position. (Photo by Lyla Wood)

Returning Lady Knights Head Coach Neal Aldridge noted that his team won only one match last year. The squad was competitive, nevertheless, winning sets here and there, but Buckingham did not produce enough sustained success to result in more wins.

“This year I think we’re a little better than we were last year,” Aldridge said. “We lost nine seniors the year before last, so I not only lost my starting six, I had three others that also graduated. This past year, we only lost three, and so with that, that meant that we had at least four, including our libero, that are coming back. So we’ve got four pretty veteran players.”

The roster for the 2019 Lady Knights features five seniors and five juniors.

“I think we’ll be OK,” Aldridge said Monday afternoon. “We had a scrimmage against Nottoway last Tuesday, and we didn’t win any of the three (sets), but it was 25-23 — they were really close. And then we played Central on Thursday, another scrimmage, and we did win those. So I’m not thinking we’re going to go out and beat Goochland tomorrow night (with) no problem, but I think we’ve got a lot better chance this year than we did last year.”

Buckingham opened its 2019 season Tuesday with a home match against Goochland High School.

Aldridge said his main leader on the court this year will be Christyn Amos.

“She’s a senior setter,” he said. “She was my only setter last year. Now Mia Garrett has stepped up, and we’re going to run a different offense this year, which is going to help. So instead of having one setter on the floor, we have two.”

Garrett is also a senior.

“And then last year, my kills leader was Meredith DeLong-Maxey,” Aldridge said. “She plays middle for me. She was a 10th-grader last year; she’s an 11th-grader this year. She made second team all-region last year.”

Next, the coach offered high praised for his team’s standout defensive player.

“I’ve got I’d probably say the best libero in the league this year right there with Nottoway’s libero,” he said.

Playing libero for Buckingham will be senior Hannah Davis.

“She is spectacular,” Aldridge said. “She’s tough as nails.”

Summarizing, he said, “So Christyn Amos, Meredith DeLong-Maxey and Hannah Davis are probably going to be my most influential players on the team.”

The 2019 Lady Knights feature players all over the spectrum of volleyball experience, including those who are brand new to the sport.

“I have one that has never played volleyball in her life,” Aldridge said. “She came out and is a super athlete. She’s just learning the game. Her name is Mattie Kitchen. She’s an 11th-grader, but I think she was home-schooled last year, so she’s brand new to the whole concept. And she struggled a little bit, but one or two games in, she’ll be fine.”

The coach expected to learn some key things about his squad Tuesday against the Lady Bulldogs.

“The Goochland game is always tough because they’re just such a large school,” he said.

He identified program size as a factor with other schools too.

“The teams like Nottoway, Goochland and Appomattox, they’re always tough because they have a really, really, really good program,” he said. “They’re usually turning away 15-20 girls that won’t make the team, where I’m turning away one and two. So it makes it hard to compete with that, but I think we’re growing.”

Aldridge highlighted Buckingham’s junior varsity (JV) team for a moment, noting what it means for the varsity squad. He said the JV team features a freshman and two eighth-graders who he estimated are 6 feet tall or taller.

The Lady Knights return to action Thursday at 7 p.m. on their home court against Central Lunenburg High School.

Dupuy preps to play for the Panthers