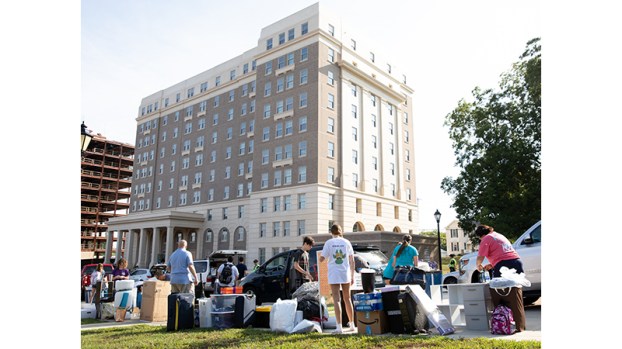 The first cars arrived at Frazer Hall just before 7 a.m. on Thursday morning to wait for the doors of Longwood University’s newest residence hall to open, a press release noted.

Frazer Hall first opened in 1970, but one would not know that by walking through the hallways, freshly painted white after a complete 18-month overhaul, officials cited in the release. The iconic building was stripped to its bare bones, rebuilt and remodeled, and it’s striking new façade welcomed this year’s freshmen as the building opened its doors for move-in day.

Those first cars were filled with, as one might guess, old pros at the college-move-in game, the release continued. Gordon Parr, a 1985 Longwood grad, and his wife, Cheryl, a 1986 grad, both lived in the towers as freshmen — Gordon in Frazer and Cheryl in Curry — and so knew that being first meant lots of help from the blue-shirt crew of Movers and Shakers before the sun really started to beam down. Both had also been through moving in a child — their daughter, Leah, graduated in 2017 — so when it came time for their second daughter, Kara, to join the club, they knew where to be.

The release stated that as the students started to move bags of clothes, computers, refrigerators and linens into the reinvigorated building, the comments started.

“It’s like a hotel, like something in Vegas somewhere,” Torrey Williams, from Richmond, said in the release. “It’s clean in there.”

Delaney Pietratoni, an elementary education major from Virginia Beach, echoed that sentiment the first time she laid eyes on her new room for the next year, officials noted in the release.

“It’s so big, and there’s nothing in here right now, so it’s kind of shocking,” she said in the release. “It feels like a really cool hotel. Like one of those hotels when you were little you’d go running down the halls.”

The release cited that by 9 a.m., the line of cars snaked around the Health & Fitness Center and up Franklin Street as the small army of Longwood volunteers called Movers and Shakers helped parents and students unload cars and carry belongings to their rooms.

For those volunteers familiar with the old Frazer Hall — many of them upperclassmen who had lived there as freshmen — the chance to see the redesigned interior was as welcome as the chance to help make someone’s first day of college special, officials said in the release. The utilitarian hallways and cookie-cutter, cramped rooms they had come to know have given way to more modern design: rooms arranged in suites, with restrooms shared only by roommates and two lounges per floor outfitted with sofas and chairs from local Green Front Furniture.

Erica Lucy, a physical education major from Colonial Heights, was taken by the suite setup, the release noted.

“I like that there’s a separate door to the common area and my bedroom,” she said in the release. “It’s really nice.”

But officials cited in the release that the thing that really got Lucy excited was her first look at the common lounge areas — especially the sunroom that delivers breathtaking views of downtown Farmville from the upper floors.

Frazer’s first floor has the feel of a hotel lobby, with large open spaces that include study spots, two kitchens and a laundry room, the release stated. And with entrances on the Main Street side of the building, the high-rise will pose a welcoming addition to historic downtown Farmville rather than serving as a barrier.

On all ten floors, students took a pause from enjoying the new-look building to take on some of the necessary move-in tasks: making the bed, unpacking suitcases and finding the right spot for the microwave, the release highlighted. Chief among those move-in tasks is meeting the roommate, who often becomes a lifelong friend. Maggie Dodge, a design major from Leesburg, and Kennedy Joyce, a criminology major from Lynchburg, had talked on Facebook — and had actually requested each other as roommates — but had never met face-to-face before Thursday. When they did, it was a big hug and all smiles as Dodge unpacked.

Officials in the release stated that Frazer Hall was closed for renovation in May 2018, just after students left for summer break. The accelerated construction timeline meant that Farmville citizens witnessed an extraordinary transformation right before their eyes. Very quickly, the inside walls and brick façade were removed, leaving a 10-story steel skeleton rising over campus. As construction crews began to reshape the interior, cranes lifted exterior panels and fitted them in place, creating a handsome building more in keeping with Longwood’s iconic Jeffersonian architecture.

“After years of planning we are all very excited to see Frazer Hall open,” Longwood Vice President for Administration and Finance Louise Waller said in the release. “The renovation turned out better than we imagined and has been well-received by students, families, community members and alums. The interiors are gorgeous, but simultaneously warm and welcoming. So far I have not identified anything that I would have designed differently.”

The Frazer and Curry renovation projects are part of a larger vision for Longwood’s campus that prioritizes integration and partnership with downtown Farmville rather than an isolated campus, the release cited. That means the creation of inviting spaces and buildings and welcoming entryways like the one in Frazer.

“I couldn’t be happier to see students moving into Frazer Hall,” Farmville Mayor David Whitus said in the release. “Both as an alum and a resident of the town, I’ve watched with pride and, frankly, amazement as that iconic tower was rebuilt. One special thing about those buildings for many people is that they are the first impression of Longwood and downtown Farmville. To have them transform into these stunning new buildings is really quite important as we grow together.”

A fire ignited in the rear trailer of a double tractor-trailer Monday evening, forcing the driver to disconnect from the... read more