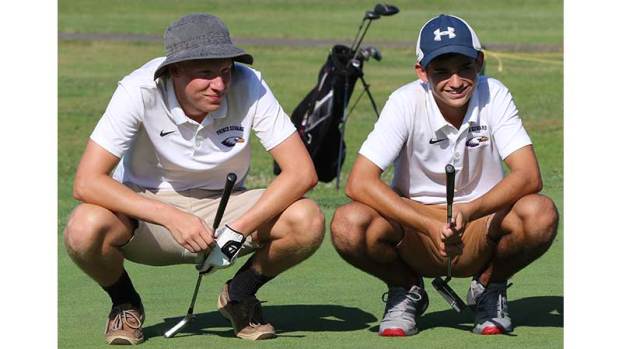 Prince Edward County High School junior Sam Detrick, left, and junior Robert Raymond share a moment on the green Thursday at Farmville Municipal Golf Course during the Eagles’ season opener. Raymond played in the No. 1 spot, and Detrick played at No. 2. (Photo by Titus Mohler)

Eagles look poised to build on ’18

Prince Edward County High School’s varsity golf team brings back a core of familiar faces this season along with some promising newcomers, all of which has given cause for optimism that the Eagles will be flying higher on the links this season.

The top four individual scores on a team combine in a match to form the team score.

The Eagles came up with a win in their season-opening action Thursday, going 1-1 in a tri-match against Nottoway High School and Buckingham County High School at Farmville Municipal Golf Course. The Cougars won with a team score of 196. The Eagles placed second with a 218, and the host team, the Knights, shot a 219.

New to the team are senior Lakkun Mina and junior Robert Leatherwood.

As for who will lead the way for the Eagles, Weaver said, “Right now it’s Robert Raymond. He was my No. 1 last year, and he’s playing really well, so I foresee him staying as our No. 1. Somebody might step up, but Robert’s playing some good golf, and he’s solid. He works too, so that’s good.”

The coach had difficulty pinpointing a clear No. 2. He led off his comments with Conwell but noted that Mina has been hitting really well and mentioned solid play from others as well.

“Like I said, we might be able to put some scores together because everybody’s hovering around the top, not the bottom,” Weaver said.