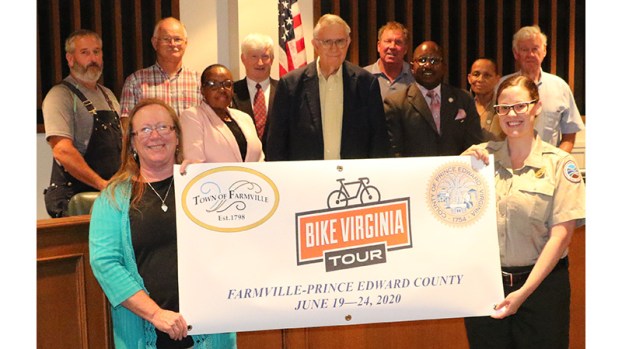 Prince Edward County Tourism and Visitor Center Coordinator Magi Van Eps announced Tuesday to the county’s Board of Supervisors that the Bike Virginia Tour will be coming to the Farmville-Prince Edward County region for six days in 2020, bringing 1,600 cyclists and an influx of more than $2 million to the area economy.

A Bike Virginia press release noted that the 2020 edition of the annual tour will mark the 33rd year of the event. Farmville hosted the first year of the tour in 1988.

Officials in the release cited that next year’s Bike Virginia Tour will be held June 19-24 and will feature 1,600 cyclists of all skills and abilities for six days of touring the beautiful Virginia countryside and visiting many places of interest.

“The 2020 tour will begin on Friday, June 19, in Farmville with the first three days being hosted at the Wilck’s Lake Park,” the officials continued. “The second half of the tour, starting on Monday, June 22, is hosted by Twin Lakes State Park and will conclude at 4 p.m. on Wednesday, June 24, 2020.”

Van Eps said the opportunity to host the 2020 tour “was ours to lose from the beginning.”

“It’s been 1997 since the last time Bike Virginia was here, and they wanted very much to come back,” she told supervisors Tuesday. “But even in ’97, they were in places like Petersburg, Amelia and Lawrenceville, as well as Farmville. This time, we get them for the whole six days.”

“Working with the Town of Farmville and Twin Lakes State Park, we put together a program to convince them to come here for those six days in June of 2020 …,” she added.

“They’re super-great people to deal with,” he said. “They provide everything, and we support them with what we can do. They were a super-nice group of people. We had a good time with them, so (we’re) looking forward to them coming back.”

The Bike Virginia release cited that the Town of Farmville and the two host park locations were selected based on their appeal to a wide range of participants, access to safe cycling roadways, proximity to lodging and available space to accommodate the size of event operations.

“The region offers exactly what touring cyclists want: friendly hospitality, great scenery and amenities such as lodging, food and historic tourism opportunities,” Bike Virginia Tour Executive Director Dr. Kim Perry said in the release. “That combined with the park layout and space available at the two host parks makes a great fit for our event. Bike Virginia moves to different regions each year. We select the location by working with community officials and evaluate the region’s services and appeal for participants that come from all over the U.S. and international destinations.”

Van Eps noted that participants in the tour do not mind spending money.

The Bike Virginia release stated that during the tour, approximately 800 guests will utilize lodging, occupying 350-400 hotel rooms or homes, and the remainder will tent or RV camp.

“We have 494 (hotel rooms), by the way,” Van Eps said. “They will eat in our restaurants, spend time with our many adventure opportunities, they’ll shop in our stores. We’re told that they will spend over $2 million, all told, in those six days.”

The Bike Virginia release and Van Eps both offered details on how this money will be spent.

“In previous years, participants spent more than $1.1 million during the six days for lodging, food, drink, entertainment, transportation and retail purchases,” Perry said in the release. “Secondary spending is estimated at another $725,363. Additionally, Bike Virginia spends about $500,000 annually on services and materials to host the event.”

Referring to those services and materials, Van Eps said, “Those will be things like renting the tents for the campgrounds, the campground headquarters, paying for the water, sewer and electricity out at Wilck’s Lake Island and Twin Lakes State Park for the tenting attendees. Local masseuses and yoga instructors will be retained to work out the kinks on the cyclists after a long day on the bike. They will purchase beer and wine from our local vendors for their evening events.”

The release cited that each day, riders will have the opportunity to choose a route from the event headquarters based on what their interests are, as well as their cycling abilities. Bike routes pass through small communities, visiting interesting destinations and offering beautiful views. Daily routes vary in difficulty — flat versus rolling hills — and range from 15-100 miles.

“Some (cyclists) will be highly competitive and ride very fast to meet … times that they set themselves,” Van Eps said. “But most will ride very leisurely rides, stopping along the way in different towns, farmers markets — buying an iced coffee — and other venues, just to, well, honestly, just to check us out.”

Routes are selected based on a combination of safety and beauty, the Bike Virginia release stated. Area officials and area cyclists work with a team of professional event planners to create the route offerings. During the six days cyclists will have the opportunity to ride as many as 400 total miles, depending on which route options they choose. Along the bike routes a “rest stop” or comfort station is provided every 20-25 miles.

Officials said in the release that these rest stops are hosted at facilities such as churches, fire stations, parks, businesses and private properties. Participants can also choose to ride for a single day, the weekend portion of the event, the weekday or all six days.

Van Eps said that food trucks will be invited to operate at the two primary tenting locations.

The average age of participants in Bike Virginia Tour 2019 was 58, the release noted.

“They’re individuals who are at or nearing the end of their working career, and quite frankly, they’re looking for a place to retire,” Van Eps said. “I can’t tell you how excited I’ve been to be taking part in this new endeavor, because, you see, we’re getting a name for being a place to come for these outdoor adventures. And hosting an event as prestigious as Bike Virginia just continues to open doors for more large-scale events like this in the future.”

To host the event, Bike Virginia, a statewide nonprofit, works with local tourism and economic development organizations, EMS, law enforcement, businesses and approximately 200 regional volunteers and civic groups to prepare for and operate the event’s services, officials stated in the release. Community groups that provide support receive donations for their volunteer time.

Officials said in the release that vendors and volunteer groups are encouraged to reach out to the Prince Edward County Tourism Office, contacting Van Eps at (434) 392-1482 or mvaneps@co.prince-edward.va.us, or to Bike Virginia soon to get details on the application process.