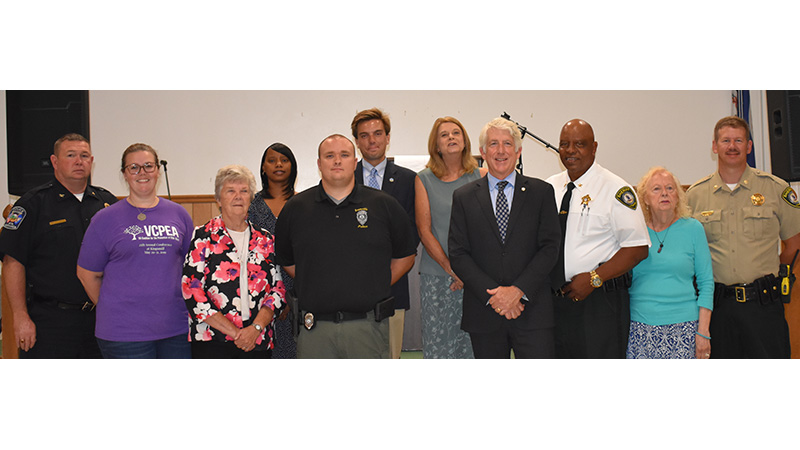 During the celebration, held at noon at the Firemen’s Sports Arena Friday, TRIAD representatives signed an agreement renewing the chapter’s commitment to the statewide TRIAD, which is overseen by Herring’s office.

TRIAD is an organization that seeks to inform and increase communication between law enforcement, seniors and community organizations in order to decrease crimes targeted against the elderly.

Prince Edward TRIAD President Karla Ellington said the local organization grew from 35 members during its first meeting at the Prince Edward Volunteer Rescue Squad to more than 350 participants in the present day.

In one year, Ellington said in an interview Friday they had outgrown the rescue squad building and moved to the Prince Edward Elk’s Lodge. After outgrowing that building, they moved to the Firemen’s Sports Arena.

She said during the event that TRIAD hosts four events each year and is glad to partner with seniors, law enforcement and community organizations.

“I am vey proud of my council members,” Ellington said in the Friday interview. She said the members’ wholehearted dedication to the organization is what has allowed TRIAD to be so viable in the area.

These council representatives received plaques presented by the Office of the Attorney General to commemorate their services.

The event included a lunch provided by Farmville Rehabilitation and Healthcare and door prizes.

Herring gave a statement and presentation about his experience working with the TRIAD program, and offered audience members tips on how to detect and avoid scams that may be targeting them.

“I can honestly say that one of the most fun, informative and rewarding things I get to do as attorney general on a regular basis is to get together with TRIAD partnerships across the Commonwealth,” Herring said.

He thanked law enforcement in the area and TRIAD leaders for their work.

“It is a true community partnership to keep Virginia safe,” Herring said.

He said that frequently, scammers will make a concerted effort to target the elderly due to their age and shifts in beliefs in the United States.

“Older Virginians come from a generation where everybody trusted each other,” Herring said. “Your word was your bond. And guess what though? If (scammers) think they can just take advantage of Virginia’s seniors, well they have another thing coming.”

The ways people will scam others constantly changes. As a result, Herring said, TRIAD’s response and information needs to change with them.

The TRIAD program, he said, seeks to address this by informing people with the tools and knowledge they need to avoid scams.

“We’re going to make sure that through TRIAD, Virginia seniors are the toughest group to rip off in America, and they’re not even going to waste their time trying to rip you and your friends off,” Herring said.

Herring said the Office of the Attorney General has numerous programs for seniors, which include Project Lifesaver, which provides electronic monitoring and emergency medical information for seniors with Alzheimer’s or dementia.

He said approximately 130,000 Virginians have Alzheimer’s or another disease that affects cognitive impairment.

He said another effort to support seniors from the Office is through providing resources to prevent opioid addiction. He said one of the highest demographics for fatal overdoses is for those between 55-65 years old. He encouraged those with unused or expired medication to safely dispose of it at a medication disposal site.

“If you have worked hard all of your life and you have saved responsibily for retirement, the last thing in the world that you should have to worry about (is) someone coming along and trying to swipe it from you,” Herring said.

He provided audience members three rules to recognize and report scams: The first is that if something seems too good to be true, such as a free vacation or a large sum of money, it probably is. The second is never send money up front, especially cash or prepaid cards as they are nearly impossible to get back. No legitimate offer, he said, would ask someone to pay money up front to receive more money later.

He said that if a solicitation happens on the phone, online or in person comes through, to wait for 24 hours, particularly if one is not sure whether the offer is legitimate. He encouraged someone to call their friend or family member to ask them whether an offer sounds legitimate.

Educating the next generation anew