Trent signs to wrestle for Ferrum 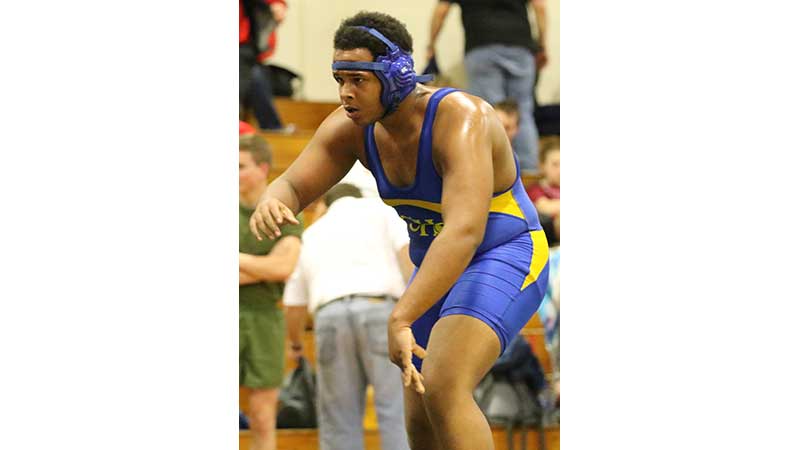 Recent Cumberland County High School graduate Kaijhaun Trent signed to wrestle for Ferrum College, where he also plans to major in psychology with the goal of becoming a counselor. Trent said he will continue to wrestle in the heavyweight class, like he did with the Dukes. (Photo by Titus Mohler)

Trent, who has wrestled for seven years, said he was excited about the signing.

“It made me happy to share that moment with my mother and thank my mother for always pushing me to the next level and helping me want to get to the next level,” he said, also crediting his coaches and everyone around him who pushed him. “And I’m happy that I am going to Ferrum College to continue what I love also.”

Wrestling at the college level has been Trent’s goal for the past two years.

He said, “Once I got to high school, I said, ‘This is something I love. This is something I want to do in high school.’ And once I got to my junior year, I got very serious about it, and I told Mom, I told my coaches that I wanted to also do this in college. And they pushed me to want to do this in college, and they just pushed me to chase after my dream, I guess you could say.”

“It’s a wonderful opportunity for him, and coming from a single-parent household, I’ve raised Kaijhaun basically by myself, and (the signing is) like a big accomplishment of my life,” she said. “I feel like it’s happening to me. I want my son to have some of the things that I never had and accomplish some of the things I never did, so sometimes I feel like I’m living through him. It’s a great achievement. I’m very proud of him.”

Trent also considered wrestling for Old Dominion University (ODU), but he said in that case, “I would also have to walk on to the team.”

At Ferrum, he has a guaranteed roster spot.

Paul Dixon, who coached Trent this past year at Cumberland, started the wrestling club at Ferrum and noted that with recent graduations of Panthers wrestlers, Trent is likely to see plenty of time on the mat as a freshman.

Trent said he will remain in the heavyweight class.

Academically, he plans to major in psychology with the goal of being a counselor.

“He’s a really good listener,” Johnson said. “He always wanted to help counsel at-risk youth, so he wanted to major in psychology. … He wanted to work with youth and maybe one day return to Cumberland and try to start some youth programs and stuff like that for at-risk teens.”