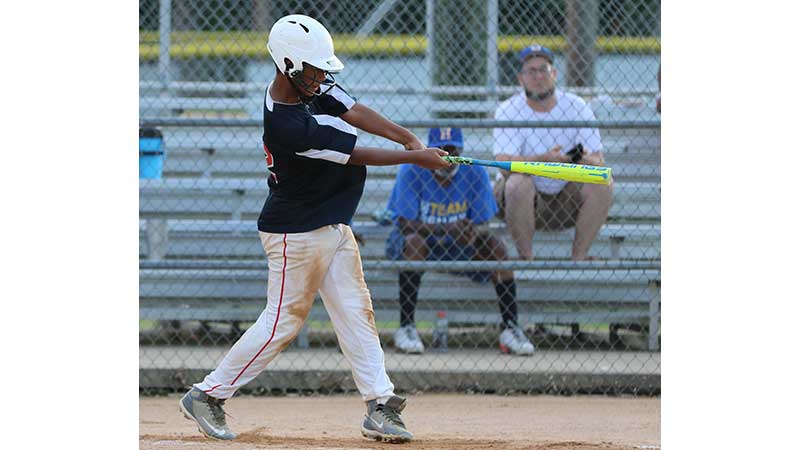 PEFYA Majors All-Star Kam Ligon hit a double that, with errors from Hopewell and hustle from Ligon, turned into an inside-the-park home run during the bottom of the sixth inning in Friday’s 2019 Dixie Youth Baseball Major League State Tournament championship game in Victoria. (Photo by Titus Mohler)

The Prince Edward-Farmville Youth Association (PEFYA) Majors all-star team put together an outstanding performance across its six games in the 2019 Dixie Youth Baseball Major League State Tournament, falling just short of the tournament title with a 7-3 loss to the Hopewell All-Stars in the state final Friday evening in Victoria.

Hopewell is a Division 2 Majors team — divisions being based on the size of a locality’s little league — and this state tournament was set to send a team from each division to their respective World Series tournaments.

The Prince Edward-Farmville All-Stars stand as the Division 1 state champions, and as the representatives of Virginia, they will face the Louisiana all-star team Saturday, Aug. 3, at 3:30 p.m. in Ruston, Louisiana.

“The story of this game today was their pitcher,” Simon said shortly after the contest. “I told the guys just now, I said, ‘Let me tell you something.’ I said, ‘You guys didn’t lose this game because you weren’t ready, because you didn’t take it seriously, because you weren’t good enough, because you weren’t prepared — none of that. We lost tonight because we ran up against a buzzsaw — the (Hopewell pitcher) was throwing great, throwing strikes.’ He’s got a nice fastball. He’s got a beautiful off-speed pitch that kept us off balance, and all the credit goes to that pitcher and their defense too. They made some good defensive plays.

“They did enough on offense,” Simon continued. “They hit the ball. We had some walks; that’s nothing they did, but they’re a good team, and that kid is a heck of a pitcher, so that was what that was all about. There was nothing wrong with what we did. We ran up against somebody who was a little better than us today. That doesn’t mean we won’t get them another time, but today he was a little better than us.”

After losing standout Harold Landis due to injury July 9, the PEFYA All-Stars saw another one of their key pitchers sidelined Friday.

“We had some serious misfortune when Austin (Morgan) got hit by that hard shot, because Austin was pitching beautifully,” Simon said.

The manager noted that fortunately, the injury resulted in only a leg bruise, and Morgan will be fine.

Though Prince Edward-Farmville did not mount a full-fledged rally in the bottom of the sixth, Kam Ligon did what he could to get one started, hitting a double that ended up being an inside-the-park home run after throwing errors from Hopewell and hustle from Ligon.

“I think that him ending on that note is going to give him a lot of confidence going forward, which, in turn, will be great for our whole team, because Kam is one of our leaders,” Simon said.

The PEFYA All-Stars went 4-2 in the state tournament and are 8-3 overall, including the district tourney.

“I can’t wait to get them back out on the practice field,” Simon said, referring to Rocky Yard at the PEFYA Field of Dreams. “That’s where we do really good work. They come, they show up, they take it serious. We work hard.”