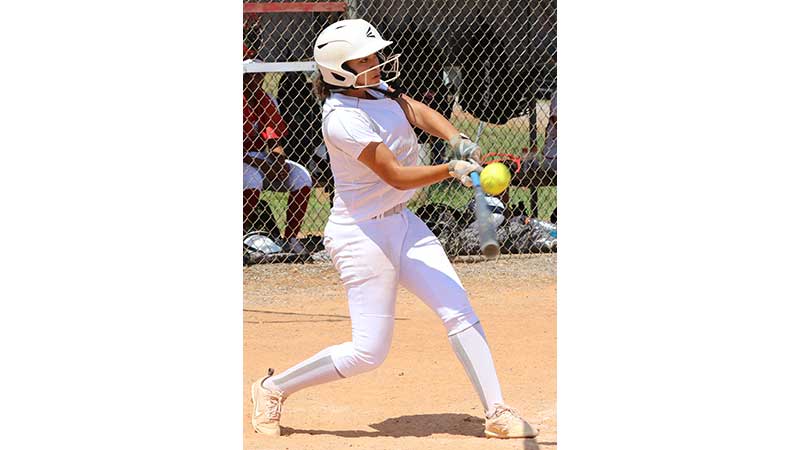 Buckingham Debs All-Star Kaya Amos competes on her birthday in the 2019 Dixie Softball Debs State Tournament in Concord on Friday. She also contributed in the circle Saturday. (Photo by Titus Mohler)

The Buckingham County Debs all-star team experienced a slow start to its run in the 2019 Dixie Softball Debs State Tournament, falling mid-Friday afternoon to the Clarksville All-Stars amid sweltering heat and then rebounding Saturday morning for a big win against the Rustburg All-Stars in Concord.

After the final out had been recorded in their game Friday at Concord Elementary School, the Buckingham All-Stars found themselves on the losing end of an 8-1 ballgame against Clarksville.

“It didn’t go as well as I expected, the way I wanted it to go,” Buckingham Debs Manager Elton Chambers said.

He noted that a few errors by his team in the first inning led to an early 4-0 lead for Clarksville.

Mia Garrett pitched the first four innings for Buckingham, and then Nikki Hurt finished the game in the circle.

Chambers said he did not see the heat as being too much of a factor because his players had practiced and played in similar weather prior to the state tourney. But he did cite the lack of a relaxed approach as being a problem for his team.

Their performance was notably better Saturday when they routed the Rustburg all-star team 16-0 in a mercy rule-shortened game.

“Madison Pribble probably had the hottest bat going,” Chambers said. “I moved her up from Friday’s game, I put her in the No. 3 spot, and she did some real good hitting.”