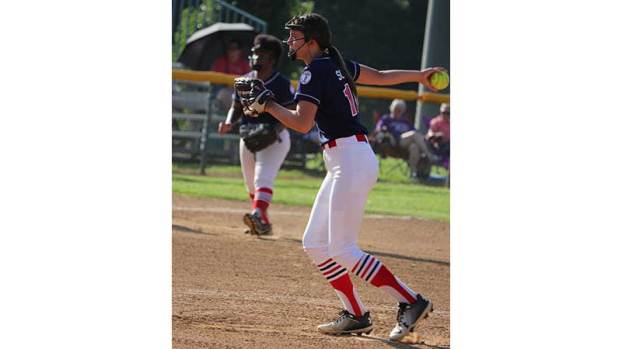 PEFYA Belles All-Star Meredith Schmidt, pictured pitching during the district tourney, was the starter in the circle for her team during its two wins so far in the 2019 Dixie Softball Belles State Tournament in Rustburg. (Photo by Farrah Schmidt)

Belles start 2-1 at states in Rustburg

They have been slow to start in their games but have recovered with outstanding offense.

On Sunday, the Prince Edward-Farmville Belles experienced their first loss of the tourney, falling 20-19 to the Amherst all-star team in a game that ended around 11:45 p.m.

“We had opportunity to score three more runs, but I guess it was too late; I guess the girls’ minds were sleeping,” Conwell said with a chuckle.

He noted that Amherst was up 8-0 in the second inning.

The day prior, PEFYA had more success in its comeback, defeating the Prince George all-star team 22-10 in five innings.

“If you’re up 10 after five, it’s the slaughter rule,” Conwell said, adding that his team experienced another slow start. “Then I think we batted the batting order for the next two innings and just put the runs on. The bats were going.”

To open its play in the tournament, the PEFYA All-Stars defeated the Amelia all-star team 12-10 on Friday.

“We started out slow and a little sloppy, but then they got it together, and they started hitting the ball,” the manager said.

Prince Edward-Farmville was down 4-2 at one point before coming back.

“We held them in the bottom of the seventh,” Conwell said.

Meredith Schmidt and Brooke Conwell have led the team in the circle.