A way to boost public safety 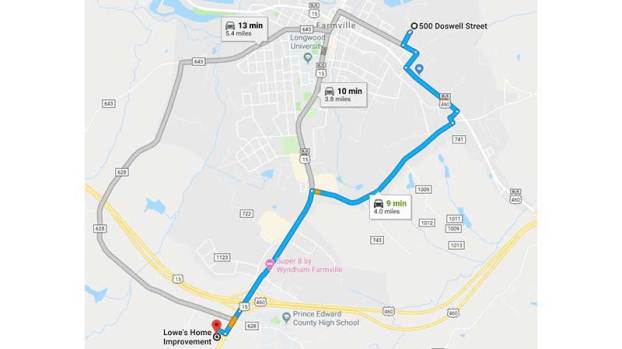 As provided in a Feb. 17 letter, this graphic shows the routes that the Prince Edward Volunteer Rescue Squad takes through town since there is currently no completed U.S. Route 460/East Third Street Interchange. 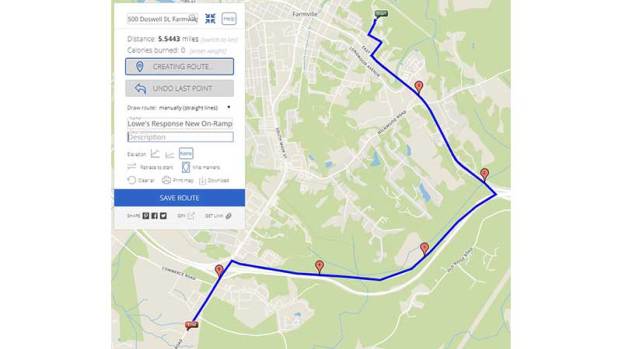 This graphic included in the Prince Edward Volunteer Rescue Squad’s Feb. 17 letter shows how the completion of the interchange would permit the squad a direct route along U.S. 460 with less risk to pedestrian and vehicle traffic, yielding a shortened response time.

Editor’s note: This is the third in a series of articles offering details on the U.S. Route 460/East Third Street Interchange that remains incomplete.

The time it takes for emergency personnel to reach the location of a call can be a matter of life and death, which underscores the importance of what a completed U.S. Route 460/East Third Street Interchange could mean for public safety.

Farmville 701 District Supervisor and Board Chairman Jim Wilck collected information on how public safety would be improved, and he summarized his findings in three points:

• Second- and third-responding fire departments would be greatly enhanced.

• Large trucks coming from the south and west would not be forced down Farmville’s Main Street through residential areas and by campus dorms whose students have to cross the street.

The organizations addressed their letters to Shannon Valentine, the chairperson of the Virginia Commonwealth Transportation Board (VCTB).

Wilck noted that his efforts to make a completed interchange a reality will be long-term, and the governing body that he will continue to appeal to is the VCTB.

In the PEVRS letter to Valentine, dated Feb. 17, rescue squad officials stated that the squad “is tasked as the primary 911 respondent for emergency medical services with the Town of Farmville and Prince Edward County.”

“Our squad building is located at 500 Doswell St. in Farmville, and in most instances, our ambulances begin response from that location,” the PEVRS officials continued. “Responding to calls on South Main Street and points south of Farmville require routes either through the Farmville downtown district or across Milnwood Road. This includes addresses within the districts of Hampden-Sydney, Darlington Heights and Meherrin, which comprise a large portion of our call volume for 2018.”

Rescue squad officials cited in the letter that the downtown route presents 12 traffic lights and exposure to pedestrians at Longwood University. The Milnwood Road route has seven traffic lights, a residential corridor and a 35 mph speed limit, which would be unsafe to exceed. These factors increase the danger when a lights-and-sirens response is deemed necessary.

“The completion of the interchange would permit a direct route along (U.S.) 460 … with less risk to pedestrian and vehicle traffic, and it would yield a shortened response time,” the officials continued. “Every minute counts for a patient suffering a serious life-or-death medical emergency or trauma.”

Officials added that points to the west of Farmville including Prospect and Pamplin, which comprised another 10 percent of the rescue squad’s calls in 2018, could be more directly accessed via the proposed interchange to bypass downtown Farmville and West Third Street.

“Completing the East Third Street and (U.S.) 460 interchange would provide a safer and faster means of ingress and egress for emergency vehicles responding to or from South Main Street and points to the south and west of Farmville,” officials wrote in conclusion. “Please consider this and keep in mind the safety and well-being of the residents and visitors of Prince Edward County, the Town of Farmville, Hampden-Sydney, Darlington Heights, Meherrin, Prospect and Pamplin.”

In FFD Fire Chief Dean Farmer’s letter to Valentine, dated Feb. 12, he wrote, “On behalf of the Farmville Fire Department, I respectfully request your support in the addition of the westbound access ramp to the (U.S.) 460 interchange. This access will provide a safe approach of response to incidents in the (U.S.) 460 corridor.”

“In the current traffic pattern, our emergency vehicles must proceed on East Third Street, then make an immediate merge into moving traffic,” Farmer wrote. “Our emergency vehicles must cross both lanes of traffic and proceed to the turning lane. Our apparatus must then conduct a U-turn and proceed (U.S.) 460 westbound. This invasive maneuver creates a safety hazard for my staff in response to emergency incidents.

“In public safety, we have seen a sharp increase in the number of traffic accidents due to emergency vehicles being struck while responding to calls for services,” Farmer continued. “This creates an ever-growing concern for this issue to be addressed to enhance public, as well as responder, safety.”

Farmer then emphasized that a completed interchange will assist with response time reduction.

In conclusion, Farmer wrote, “As stated previously, the evasive maneuvers our staff are faced with to achieve our direction of travel greatly influences emergency operations. I respectfully request your consideration in this matter, and I hope you will support these changes to enhance first responder safety.”

In the course of his research, Wilck honed in on a potential future tragedy involving Longwood University students that a completed interchange would render far less likely to happen.

“Not having a ramp on eastbound U.S. 460 forces large truck traffic to use Main Street to get to East Third Street,” he stated. “Main Street goes right by two large dorms on the west side of Main Street just as trucks are forced to go from four to two lanes. Students from dorms a block further down Main cross at a two-lane crosswalk to get to the campus.

“These students do not have a light but only a yield sign and painted crosswalks to protect them,” Wilck continued. “The students are frequently looking at the cellphones in their hand and paying little attention to the traffic as they cross in front of it as heavy truck traffic is coming on a downhill grade towards them.”

Wilck noted that to make things worse, there are a variety of fast-food restaurants on the side of Main Street opposite from the Longwood campus, making this area one that draws a significant amount of student foot traffic.

“The students, in large numbers, regularly cross the street for breakfast, lunch and dinner,” he wrote. “These same students then have to recross the street to get back to all the dorms on campus. If a large truck has a malfunction, loses it brakes or a sleepy driver fails to pay attention, a large number of casualties could result, and with the heavy student pedestrian (traffic) constant(ly) crossing, it will happen.”