A 1-1 start to state title defense 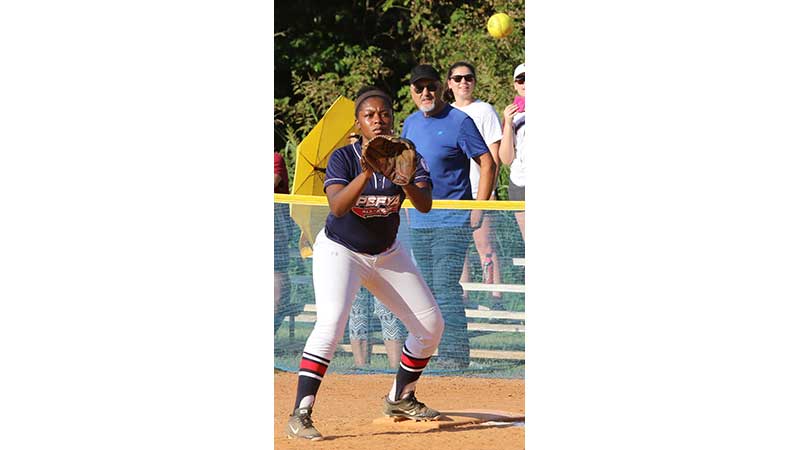 PEFYA Debs All-Star Shauneice Beasley collects a throw at first from Hannah-Gray Schmidt on Friday during the 2019 Dixie Softball Debs State Tournament in Concord. Beasley has also served as a closer in the circle across both of her team’s first two games. (Photo by Titus Mohler)

The PEFYA squad is seeking to win its fourth straight state championship, but it has found the road unexpectedly difficult due to struggles on offense.

The girls opened their state run Friday with a 6-2 victory over the Powhatan all-star team.

“They played us hard,” PEFYA Debs Manager David Schmidt said of Powhatan. “The whole tournament so far we’ve not gotten our bats going. We’ve been playing good defense, but we have not come to life on the bats completely yet.”

Starting in the circle for Prince Edward-Farmville against Powhatan was Abbie Schmidt, who pitched into the seventh inning.

Manager Schmidt said he then brought Shauneice Beasley into the circle in the seventh to close the game out.

With intense heat being a significant factor Friday, games for Saturday were moved from the afternoon to 8 a.m., 10 a.m. and noon.

The PEFYA All-Stars played the Halifax all-star team in the 8 a.m. contest, and the game did not go as they expected, with Halifax defeating them 4-3.

“We should have won,” Manager Schmidt said. “Every time we hit the ball, it went right to someone. Like I said, our defense has been good. Between the two games, we’ve only had possibly two errors, which that allowed three runs to score in the Halifax game.”

Despite the team’s inconsistency on offense, there have been a couple of batters who have proven reliable.

“Madelyn Bickford and SaRoya Walton have been consistent on the bats with slapping, and then Shauneice and T’Asia (Beasley) have been doing pretty good at the bats,” Manager Schmidt said. “But we’re just hitting everything to people, and there’s nothing you can do about that.”

As of Monday morning, he was expecting the game to happen Monday at 8 p.m. The opponent was set to be the Prince George all-star team.

Schmidt said he still expects the strongest opponents in the tournament to be the Buckingham, Clarksville and Amelia all-star teams.