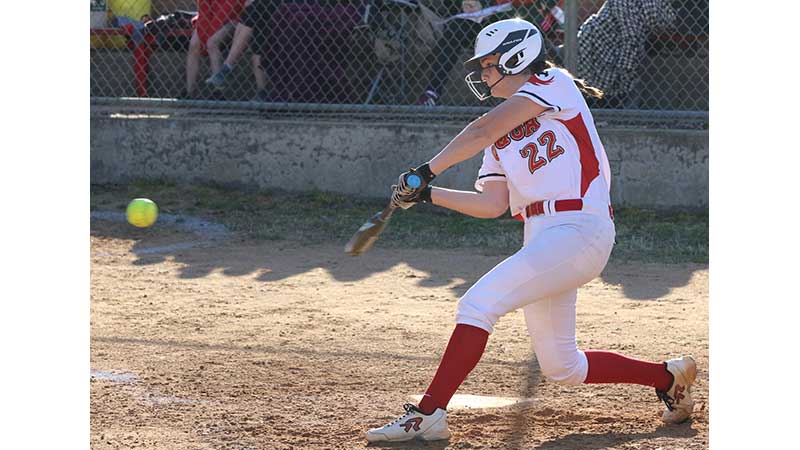 Fuqua School senior Regan Ware was outstanding at the plate this year in addition to being a key force in the circle for the Lady Falcons, leading to her second consecutive VISAA Division III State Softball Player of the Year award. (Photo by Titus Mohler)

This was the second straight year that Ware, a senior this season, was named the top softball player in the state for the division.

The Lady Falcons, who featured eight seniors this year, finished as the VISAA Division III state runners-up, ending up with an overall record of 14-6.

Reflecting on his team’s representation with regard to all-state honors, Fuqua Head Coach Mike Ford said, “I was pleased with it. There might have been one or two of the players I felt should have been on the first team, but I kind of understand you have all the other teams to consider also, but I’m happy for the girls.”

Ware made a big impact on both sides of the ball this season for the Lady Falcons, and she was excited to repeat as state Player of the Year.

“It was a milestone for me to be Player of the Year last year,” she said, “and the opportunity to earn that title again really made me feel like all my work through bumps on the road and injuries was really worth it.”

Ford said, “I felt, offensively, she was just hands down the best offensive player I know in Division III. I’d put her offensive stats up with just about anybody this year. She just squared the ball up all year long.”

“I feel like my hitting stats really were something to be proud of,” Ware said. “I set my goal to have 10 home runs by the end of the season, and I accomplished that.”

As a pitcher, she went 7-5, recording 91 strikeouts and an earned run average (ERA) of 2.69. She also registered a save.

Ware will play for Ashland University in Ohio next year.

Haney led Fuqua in several of the other offensive categories this season. Across 20 games, she had a team-high 33 hits, including 22 singles and six triples, 30 runs scored and she stole 20 bases. She had a batting average of .440.

Haney also pitched 12 innings across three games and earned a 2-0 record in the circle.

Reynolds was a threat at the plate and a key force behind it too.

“I just think she’s by far the best catcher,” Ford said of Reynolds. Referring to her state accolade, he added, “It’s deserved. She struggled some with the bat, but her and Regan, their uncle tragically passed away midway through the season. And we were playing a bunch of road games in a row. It was kind of a very tough schedule we had, and she hit a little slump there for a while. It was a difficult time for a couple weeks there for both of them.”

“She came in and pitched when Regan was nursing her back and did phenomenal,” Ford said. “She started swinging a bat about halfway through the season and was as good a hitter as we had from then on. She was as dangerous as Virginia and Regan during that stretch — just on fire. Her outs were hard hit balls. But she can catch, she caught a couple games, she pitched some games, she played third base. If I had to move her to shortstop, I’d move her to shortstop. If I had to put her in the outfield, I could have put her in the outfield. She was my most versatile player this year. I was just very happy for her to get first team.”

Across 20 games on offense, Schmidt had a .333 batting average, recording 23 hits, including a team-high eight doubles. She also had 16 runs scored and 11 RBIs.