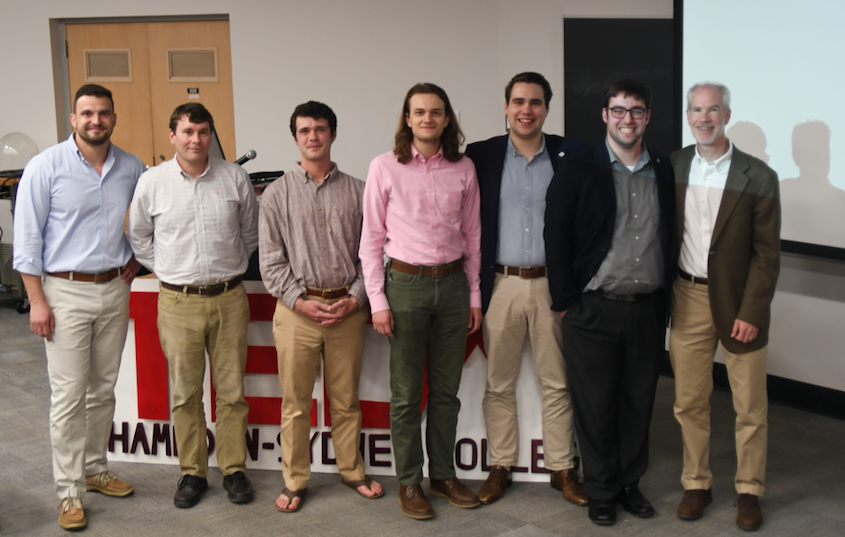 Over the course of four days, Hampden-Sydney College (H-SC) recently celebrated independent academic inquiry during the annual Student Research Symposium, a May 6 college press release cited. Now in its third year, the symposium’s goal is twofold: To give students an opportunity to share their work with the wider community and, in so doing, to showcase the variety of student scholarship carried out at Hampden-Sydney.

Officials noted in the release that new to the symposium this year was Hampden-Sydney’s first TEDx event, a series of live (Technology, Entertainment and Design) TED-style talks delivered by Hampden-Sydney students and faculty, which kicked off the week’s events.

As cited on TED.com, “TED is a nonprofit devoted to spreading ideas, usually in the form of short, powerful talks (18 minutes or less). TED began in 1984 as a conference where Technology, Entertainment and Design converged and today covers almost all topics — from science to business to global issues — in more than 100 languages. Meanwhile, independently run TEDx events help share ideas in communities around the world.”

The H-SC TEDx event centered on the theme of “Tradition and Change at a 21st Century Men’s College,” tackling issues of socio-economic status, masculine identity, religious faith, artificial intelligence and global security, capped off by Dr. Alexander Werth’s defense of the all-male college, the released stated. All of the presenters — Dr. Ivo Gyurovski, senior David Bushhouse, junior Shelby Hanna, Dr. Robert Irons, junior Wade Bredin, senior Dalton Hall and Werth — were chosen by the college’s Phi Beta Kappa chapter, which identified H-SC community members known for both their ability in public speaking as well as their enjoyment of it.

Officials said in the release that as in years past, student presentations throughout the week crossed disciplinary lines — the sciences, rhetoric, global cultures and business, to name a few — and drew from topics as diverse as economic development, molecular biology and Russian literature. And the presentations themselves took on all forms, including podcasts, television commercials and elevator pitches in addition to the more traditional poster and oral presentations.

PechaKucha Night allowed the college community to engage with academic research in a more casual, accessible format, the release highlighted.

“PechaKucha forces students to take their research and distill it down into a bite-sized piece,” H-SC Director of Student Research Michael Wolyniak said in the release. “And we deliberately hold our evening event at the Tiger Inn over a beer, so the atmosphere is relaxed and fun.”

PechaKucha presentations utilize 20 slides that advance every 20 seconds, giving speakers just under seven minutes to communicate their work with the audience, officials cited. And the events are frequently held in casual, public spaces with food and drink — making H-SC’s Tiger Inn the perfect venue. Four students and two professors gave PechaKucha presentations on a research topic of their choice, from “Mark Twain to Styx: Going Overboard with Sailing Metaphors” by senior Jack Dickerson to “The Mathematical Art of Tessellations” by senior Leonardo Anselmo. The event was held in conjunction with H-SC’s Department of Rhetoric.

Officials concluded the release by noting that Wolyniak hopes TEDx Hampden Sydney College and PechaKucha Night will become annual events and looks forward to increased collaboration between the college’s Office of Undergraduate Research and H-SC’s Rhetoric Department in the years to come.

“It’s just another way the college is living out its commitment that all Hampden-Sydney graduates will have demonstrated the ability to write and speak clearly, cogently and persuasively,” officials said in the release.