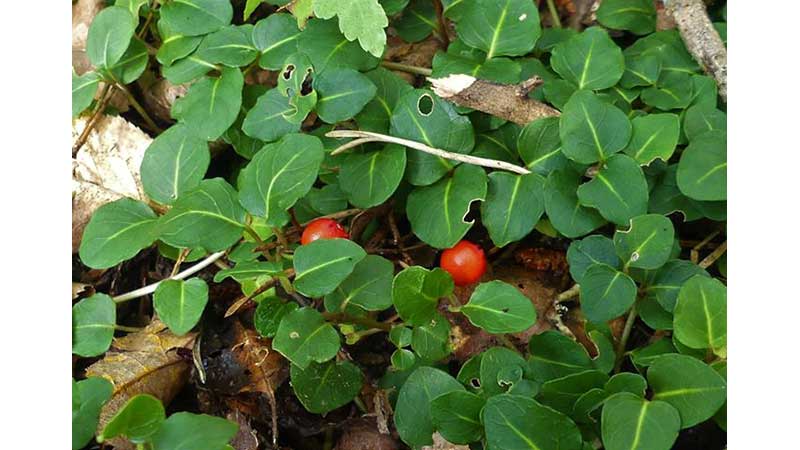 Partridgeberry is a native plant that is low and creeps across the ground at a very slow, well-behaved pace.

I don’t know exactly how it happened, but, at nearly 72, I find myself managing two homes and gardens — one in town and the other in the country where there are lots of deer. Yes, I have some help with the heavy stuff, but my gardening guy is just as old as I am and has a bum knee, so I figured it was time to work smarter, not harder.

So … I’m trying some new commonsense changes involving what to plant and how to plant it.

At the farm, I have an ironclad rule that absolutely nothing, no matter how pretty or how much I love it, can be planted unless it’s deer proof. That means no azaleas or camellias, but lots of peonies, irises (including some native ones), hellebores, crape myrtles, forsythia, daffodils, boxwood and allium. Many of these plants were already at the farm and have survived years of gentle care followed by even more years of not so benign neglect. They’re all tough and that’s why they were originally planted. What about natives? This is a nearly 100-acre farm, so there is room for them too. There are huge patches of several types of milkweed bordering the more groomed areas close to the house. Other natives here and there include mayapples, fire pinks, lots of asters, goldenrods of all types, saxifrage along the creek, lady’s tresses orchids near the old tobacco packing house, winged sumac, St. John’s wort, Ruellia, Joe Pye weed, brown eyed Susans and more brambles than you can imagine.

At the house in Crewe, I don’t have any problems with marauding deer, so in addition to peonies, irises, hellebores and crape myrtles, I have lots of azaleas, daylilies and roses. Why so much emphasis on peonies, irises and hellebores? They’re all low maintenance. Peonies can live for 100 years or more, produce highly fragrant flowers, and prefer to be left alone I put plant supports around them when they begin to emerge in early spring, deadhead spent blooms, and make sure there isn’t too much mulch around them. That’s it. The hellebores are evergreen, bloom before anything else, and have interesting foliage all year. Other than the removal of old leaves and blooms, they don’t require anything; left alone, they’ll fill in empty spaces in perennial beds. The irises and daylilies are both tough, produce fabulous flowers and just make me happy. They need to be divided about every two to three years, but that’s all. And, yes, there are native plants in the town garden – green and gold, Solomon’s seal, violets, striped wintergreen, cardinal flower, trillium and more.

As for vegetables, at both houses, I’m growing more things in large pots close to the back door. What’s not to like about stepping off the porch and harvesting peppers, tomatoes, onions, horseradish, lettuce, blueberries and herbs. For the first time in over 20 years, I didn’t plant potatoes because we just don’t eat that many anymore. I do have sweet potatoes growing in several large barrels in a sunny spot because the young leaves are delicious when stir fried with ginger and garlic.

I’ve always used lots of mulch, especially pine bark and pine needles, but I confess that I hate putting the stuff around everything. This year, I’ve continued to put pine needles in the azalea beds in Crewe, but have reduced the amount of mulch used elsewhere. Instead, I’ve been allowing perennials, such as hellebores, to grow thicker and thicker so that they cover the ground and mulch isn’t needed. I’ve also underplanted some taller plants with creeping plants that fill in bare spaces so that weeds can’t grow. The native partridgeberry plant is a very well-behaved creeper that deer ignore. As for digging and turning the soil, well, I don’t like to do very much. Turning the soil encourages the growth of weeds, may damage the structure of the soil, and is lots of work. I no longer spend much time amending the soil with compost. Whatever I plant has to be able to grow in the soil that I have. When I plant new roses in Crewe, I don’t dig a new bed; I just dig holes, and, yes, this makes my friends in England crazy. Very crazy. I will have to dig and divide daylilies in Crewe later this year and that will mean essentially redoing the entire bed, but they’re an exception.

Even the pots on the front porch have a new look. Some are filled with Heuchera, yucca, boxwood, and other plants that look great all year. Other pots have herbs and greens intermixed with edible flowers, such as pansies. With this approach, I don’t have to start from scratch every spring and fall.

Just call me lazy, but sometimes a radical change is needed. I’ve got more time this year to enjoy my gardens because I’m spending less time stressing over maintenance. A few weeds never hurt any garden.

Cynthia Wood can be reached at cynthia.crewe23930@gmail.com.

Moss: Going with the flow