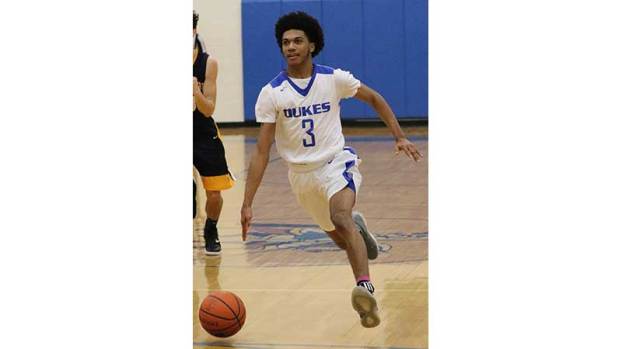 Patterson to play for the WildCats

He reflected on the achievement of securing a chance to play college basketball, something that he said has been his main goal since he was a little boy.

“I was extremely blessed and grateful for this opportunity,” he said. “It meant so much to me.”

Patterson is coming off a stellar senior season in which he helped the Dukes advance as far as the Region 1B semifinals and go 17-9 overall. He was named to the all-region and all-district first teams and the all-state second team.

Patterson transferred to Cumberland from Prince Edward County High School after his sophomore year. He has also played for a couple of travel ball teams, including one in Richmond and one comprised of area players called the Central Virginia Kings.

He noted that during his college selection process, there were a few different possibilities he was considering, “but Randolph was where I felt like I would be at home at.”

The elements that made Randolph feel like home were “the atmosphere, the campus, the coaches, the staff,” he said.

Patterson’s achievement has been a source of great joy for his family.

His mother, Erica Patterson said, “It means everything to us, to me, my husband, M.J.’s sister. It’s just a blessing.”

M.J. Patterson is already following a workout plan provided to him by Randolph. As far as how WildCats coaches plan to use him on the court, he said he has not been told yet.

“Everything will be worked for,” he said.

Mosby has a theory on how Patterson might be deployed, and it is focused on the backcourt.

“I’m thinking more of a two (guard) with his experience at that position,” Mosby said, “and hopefully, when he’s there, they can give (him) some spots and some looks at the one, so I definitely think he can help out at that position also.”

Citing the strengths Patterson will bring to Randolph, Mosby said, “I would think first off he’s definitely coachable, follows directions and instructions well. Academic-wise, he’s no problem. He’s a straight-A student, so that should be no problem.”

And Patterson has a plan mapped out academically and for his career.

“I plan to major in education, and then I will go and get my master’s and earn my master’s in speech language pathology and become a speech therapist,” he said.

He confirmed there is a good chance that amid his studies as a freshman, he will already be getting playing time during basketball season.

His mother said that this chance could, indeed, come “if he goes in and works hard, not just on the basketball court but in the classroom, does everything he needs to do, prayerfully. That’s our prayer.”

For reaching his present level of achievement, M.J. Patterson said, “First I would like to thank God. I thank my parents and sister for their unconditional support. I thank the coaches and staff at Cumberland and Prince Edward County schools. I’m thankful for the warm welcome that I received from everyone at Cumberland County (High) School when I transferred. I thank my family, my church family, teammates, friends and the community, who have always provided me with encouragement, and I thank (WildCats Head) Coach (Pete) Hamilton and Coach (Marc) Slade, giving me the opportunity to play at the next level.”