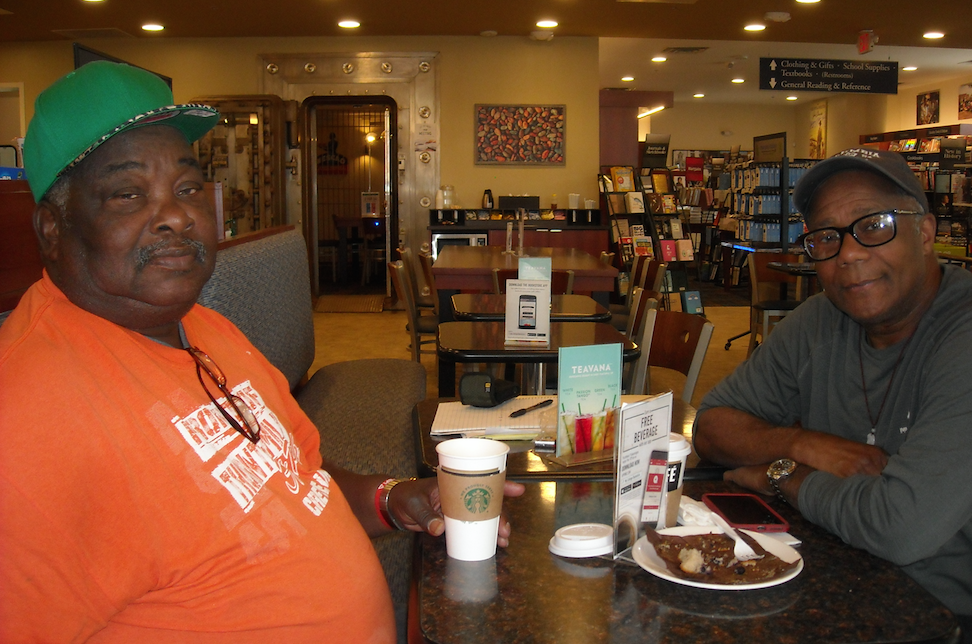 The Rev. John Hurt, left and Lonnie Calhoun, discussing literacy. Hurt said he realizes there is more to reading than just reading – there is integrating the skill and all the opportunities it offers into life.

The Rev. John Hurt never finished high school and doesn’t even have his General Education Diploma — and that’s why he will so enthusiastically tell you the value of an education.

Rev. Hurt is a member of Prince Edward’s infamous Lost Generation, those mostly African Americans denied an education when the county closed its schools rather than see them desegregate.

He had just completed the first grade when the schools were closed. While they were closed, free schools operated by patrons were opened and he did briefly attend. But when the public schools reopened five years after initially closing, he did not return.

He was one of 11 children in the family when the schools closed. His father had died and being out of school meant that while other students were sent away to other localities or states to continue their education, that wasn’t an option for Hurt — as he and his siblings remained home and provided badly needed farm labor.

Maybe that is why he has learned to love and cherish most what he was denied.

Now a retired Virginia Department of Transportation heavy equipment operator, Hurt pours himself into working with various tutors in developing his reading. In Charlotte County, he works on writing cursive. In Prince Edward County at the library the goal is reading fluently, “I don’t want to have to stop at a word.” Hurt said. In Buckingham, he uses computers and mathematics in addition to writing.

Hurt realizes there is more to reading than just reading – there is integrating the skill and ingratiating all the opportunities it offers into life.

“That computer needs to be part of literacy,” he said. “They turn that computer on and they go find one thing they have interest in — it will open up a whole new world to them.”

Hurt hopes that these are the types of lessons that will be part of Prince Edward County’s newest literacy efforts.

STEPS and the Prince Edward County Literacy Council are looking to re-establish or strengthen local Adult Basic Education, English as a Second Language, and Family Literacy efforts. A litany of community organizations and groups has gotten behind the endeavor.

Earlier this month, the first group of future tutors went through a training session. A pilot tutoring effort will begin in June and the primary effort will commence in late August or September. Organizers have said the pilot will focus on one-on-one and small-group instruction. It will include functional ability such as writing a resume, and doing a mock interview. The Barbara Rose Johns Farmville-Prince Edward Community Library will house the tutoring sessions and will also offer computer instruction. An eventually-to-be-hired director will spread the efforts to other locations across the county.

In addition, a Facebook page has been set up to advertise literacy council meetings and provide updates on activities and happenings.